Venice, as strange as it may seem, is one of the largest agricultural municipalities in Italy. Which certainly clashes with the city’s recurring image that has been created over the years. Mostly as the city that enchants with visual games of daring and unstable ancient stone reflected in its canals, and overlooking on the horizon, its immediate mainland: a once threatening juggernaut, now a mostly sleepy agglomerate of smokestacks and factories. (VERSIONE ITALIANA)

The hinterland and islands teem with land under cultivation and vegetable gardens. The most famous being the island of Sant’Erasmo and Vignole. From these, daily gardeners once challenged each other to the oar and sail to arrive early in Rialto aboard vessels with names such as Battelle, Topi and Caorline loaded with vegetables, racing to get there first in order to set the price. Notwithstanding, the old, historical Venice also contains fertile patches of land actually devoted to cultivation, which still thrive to this day.

We visited one such green “patch” on a scorching July afternoon, on the island of Giudecca at the Zitelle vaporetto stop, a few minutes by boat from San Marco. Its main life giver is Michele Savorgnano. A forty-seven year old Venetian , a kind of Robert Louis Stevenson, bearded, with background in Hebrew and Arabic studies, two children and a teacher and actress.wife.

“Vuoi un bicchiere d’acqua?” Would you like a glass of water?
With this offer Michele welcomes me, showing me to a long wooden table in the shade, in the quiet of his garden before putting down a carafe in which leaves of Luigia grass float blissfully. Meanwhile I quench the thirst with the pleasant tasting  liquid and not far away my eyes intercept a boy and a girl intent on choosing varieties of flowers and placing them carefully in plastic trays. Still in a daze, perhaps because I’m still intent on studying the man who a little while ago surprised me welcoming me in bare feet between rows of vines, flowers and plants, straw hat on his head, an olive green tank top that blends well with the amber of his tan, full beard, pointed, framing his face, as  gaunt as that of an Eastern monk. He then starts talking, as I begin to recover more from the surprise of the place than from the heat.

“We started six years ago with two associations, Spiazzi Verdi (Green Spaces)  and Laguna nel Bicchiere le Vigne Ritrovate (Laguna and in the glass the vineyards rediscovered), on land owned by the IRE (Institute of Recovery and Education), which measures around half a hectare and was abandoned. In the buildings you see at the bottom of the land there was once an orphanage. Now, after its restoration, they have turned it into a home for the elderly and an Alzheimer  day center. The push that drove me to give up what I did before and choose this new life was the learning journey of permaculture and an experiential learning path of focused on organic farming, where farmers are taught to truly work with the land.”

Permaculture?
It’s a method for designing, managing and refurbishing man-altered landscapes so that they are able to meet the population’s needs such as food, fiber and energy and at the same time exhibit resilience, richness and stability of natural ecosystems. It is a planning and design system that is based on natural patterns/models. It rests on three foundational pillars: 1. care of the earth/soil 2. personal care,  and 3. on working focusing on the concept of limit, which does not mean limited.

Planning nature is a euphemism but designing with nature is essential! Daily care and harmony with nature are practices that are associated with the type of planning based on the work of Bill Mollison and David Holmgren, which is mostly based on two fundamental ethical principles, a. Care for the Earth and b. Personal Care . Designing with nature teaches mainly to always be listening, to observe signals that the environment sends us, to ponder our actions so as not having to suffer the consequences. An error, in some cases, may affect a crop but above all cause the rupture of a fragile balance. Since I started, I now have a dozen volunteers who help me, and here there is a lot of work. I don’t count the hours I spend here daily. Then in winter the rhythms change, and I stay at home a lot to enjoy my two children and let my wife go to work.

Explain this place
The place you see here is probably the site where you find the most biodiversity in the lagoon . We have more than three hundred varieties of plants , fifteen species of tomatoes, twelve of basil , ancient varieties of fruit trees , plums , prunes , apricots . We do not buy anything in nurseries and we select our own seeds . We are resilient . Now , for example , we are selecting the local varieties , plants that are suited to the conditions and the soil . And, as a result, we get stronger plants . This garden has inspired similar projects in the city , like the garden of Campo San Giacomo , the one in Santa Marta , and the Ospedale al Mare in Lido . And here we have seen hundreds of people participate at the meetings we organize, as well as at practical and theoretical workshops and events.

What type of agriculture do you practice?
We can define our crops as synergistic . Natural agriculture was conceived by Masamobu Fukuoka, who, thanks to his observation of nature had understood that agriculture had misinterpreted the concept of cultivation of the land . Fukuoka has long observed the forests and was able to understand that the trees grew without the need to plow and fertilize the land . Applied to agriculture, it brings us to the concept of “not doing” . But to get to the “not doing” state (in agriculture) we must “do” a lot! Fukuoka’s inspiration comes from the philosophy of Mu , roughly translated as ” without ” or ” no-one”, which is at the core of Zen Buddhism teaching. Here for example, we did a lot of work; before there was only grass . Now you see vines and plants . The concept that inspires us is to pursue a continuous and total ground cover . Not plowing , leaving the bare earth , not using chemicals and not fertilizing”

How is all of this possible?
It’s the soil cover itself that provides for its nourishment. Basically here we cultivate more the soil than that plants. The plants are airborne beings whose roots serve only to prevent them from taking flight. All organic waste from the nearby gardens of the Giudecca is a great asset for us. We make a mulch, which in practice is a natural fertilizer, protects the soil from the sun, has a rich animal life that lives below the layer, and eventually turns the organic matter into inorganic substance, therefore well absorbed by the plants.

Here were old vines that now we are replacing with Dorona and Turchetta grapes,which are the essence of a red wine from Polesine that does rather well in this climate. However, this garden is not the only one I manage. I also have four hectares in Sant’Erasmo strictly for the collection of wild plants, such as wild leeks and herbs (officinalis). Even in Venice young people (frankly not enough), are returning to the earth and to our lagoon; there is great need for people who are dedicated to the care of the land. We have such a vast panorama of different green spaces. From the small plot of land to the abandoned convent. In addition, I would like to teach young people how to heal a place that is in a relationship with other places. ”

Are you thinking of a kind of school?
Yes, but I imagine a school where I learn and help students to learn this form of activity and its related economic cycle. Venice is a system that relies on a single culture based on tourism. Looking at resilient systems, Venice is therefore a model too biased towards one single input, and therefore unstable. Eventually quite dangerous.

We need to introduce various types of economies, based on the care of the territory. Even the Serenissima (Venice was called “The most Serene Republic), upon losing its supremacy in the maritime trade, turned to the mainland, to the countryside. But care for the environment does not just mean working the land: it also means caring for other material activities and cultural legacies such as local craftsmanship. This, what you are visiting, is a walled vineyard, therefore “closed”, but in relationship with the outside. Here, as I said, many people come to visit, work and learn. For instance, a few months ago we hosted a meeting with three chefs from Café Quadri, the Covino and Estro who cooked for fifty people : using our products and facilitating a participatory event of great sharing. 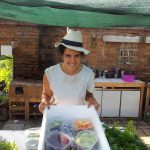 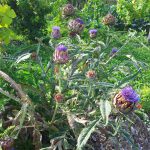 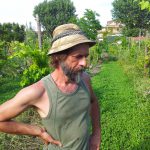 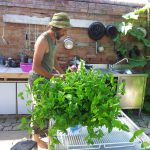 Michele, before the two young people were collecting flowers and arranged them carefully in plastic trays. What do you do with those flowers?
I grow flowers and sell them to the many restaurants in the city, who use them in the kitchen. I do not earn much, but enough for me to live, and not give up the life I lead. Have you ever eaten nasturtiums? They’re great, come , I’ll let you taste them and I’ll show you the other plants and how rich our land is.”

And so as I accompany him through the vineyards and the countless plants, I cannot stop popping into my mouth these delicious, brightly colored nasturtiums. Meanwhile Michele tells me about a multitude of flowers, herbs, leaves. And flowing through my eyes I see amaranth, yarrow, marigolds, cornflowers, carnations, hibiscus, hollyhocks, poppies, sage, white clovers, thistles, artichokes, fennel, celery, beets, rumex acetosa (sorrel), mezclun, artemisia absinthium(wormwood), tarragon, helichrysum(curry plant), santolina chamaecyparissus(cotton lavander), black and greek basil, garlic, and red onions. In a colorfully aromatic sequence that appears to be never-ending.