Published in Italian as a special issue of Nuova Prosa, "La penisola non trovata" was presented last May in Milano and at the Torino International Book, with the English version, "The Italian Daze".
FRED GARDAPHE 22 Febbraio 2018 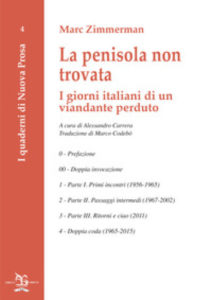 Who can tell if this is fiction or creative non-fiction? Even the narrator of these stories is not convinced that what he’s writing is one or the other. Only the author knows for sure, so when reading Marc Zimmerman’s “The Italian Daze” be careful what you think. Suffice it to say that Zimmerman, emeritus professor of Latin American and Caribbean Literature, from the University of Illinois at Chicago and the University of Houston, has turned his critical gaze away from the texts whose interpretations have made for him a fine career in academia, and towards the inner recesses of his creative mind, one that was developed early through his undergraduate work in creative writing at San Francisco State University, and one held at bay throughout most of his academic career.

Like so many critics before him, (here I’m thinking of David Lodge, Frank Lentricchia, Sandra Gilbert and others) Zimmerman has unleashed his own attempts to create the type of literature that he spent an entire career criticizing. When this happens critics are usually quick to dismiss the efforts and explain them away as a type of wanderlust that happens to those who fall so in love with what they read that they want to become a part of the very literary traditions they have criticized.

In “Italian Daze”, which contains all of which you’ll find in the well-done Italian translation, “La penisola non trovata”, Zimmerman creates Mel, a character from whose perspective we get most of the details regarding a number of trips to Italy over a fifty-year period. Over that time, we see Mel’s growth, from a naïve youth, chasing beauty here and there, to an older, wiser veteran of the ups and downs of life. In each story, as we chart Mel’s maturity, we also get glimpses of what could be the author’s literary antecedents.

The collection opens with “An Invocation” and “Early Encounters (1957 – 1961) riffs on all the Italians that came into the life of this Jewish American boy as he was growing up: Sinatra through his sister (he notes Sinatra’s shift from liberal activist to right-wing apologist), the in-laws of his cousin Leonard, who marries into a large Italian family, and his early physical exchanges with the Italian girls of his neighborhood.

We can get some glimmers of Hemingwayesque action in “Marriage Italian Style” in “Three Places” (1964 – 1965). His first trip to Italy with his new wife, an Italian American beauty who’s tough as nails takes him through the trials of her physical problems along the way, while more direct, recalls Hemingway’s “Hills Like White Elephants.” No matter what happens to the two of them, we know that they are not destined to be together long, something it takes Mel a long time to figure out. When they get to the town, from which her father was chased by the stones of a local priest, we see the humor and the sadness in trying to recapture someone else’s past play itself out through Mel’s attempts to make things right with his new wife. And the third story in this section echoes some of Hemingway’s and a bit of William Burroughs as the couple joins another in a trip to Mexico in which a crazy, Vittorio Gassman-like Italian takes them on a wild romp south of the border in a sport scar that seems to be going over the cliff at every turn.

Throughout these early stories, we can’t help but think of Mel as a Quixotian figure, chasing beauty, mistaking lust for love, and ending up with his lance aimed at mirages. By the time he finally marries, a second time, a third time, Mel has found not only his career as a professor, but his voice as a writer who now struggles to get to the stories his career has kept him from facing. Whether he thinks them or writes them, he feels he needs to go back to Italy

to gauge his memory, to find out how much in his stories he was remembering or inventing. Was he writing fiction or memoir (203)?

And this is the question the reader asks as well, for the next section, “Later Encounters”(1981-2011) dealing with later trips to Italy shifts from first person to third pretty liberally, keeping us from actually knowing just what is going on beyond the poor treatment they get from a hotel manager or the impossibilities of travelling with a wife and your best friend.

The collection concludes with stories that seem to reflect on everything that we’ve just read. “A Final Encounter, The Jewish Question and Other Questions”(2011 – 2016). In these, the author outs Alessandro, his Italian editor and Marco, his translator as the very stories we’ve read get prepared for an Italian edition. In this section the translator brings up questions that readers might have been asking along the way: what’s so Jewish about Mel and does he care more about Italian culture than his own. A very telling and quite funny dream ends the collection with Mel in his underwear after swimming from the Tiber right into a fountain at the Piazza Navona lost in the labyrinth of Roman streets. Perhaps the dream and its connection to the author is the most fitting image of just how Mel feels about his interaction with Italy. He gives it his all, throughout his life he’s tried to connect, and yet, even with a book of stories, now in Italian, he still feels lost.

While there’s a tendency more toward the literal, than the literary in the writer’s style, and a need for a good copy editor to get in there and clean up its flaws, “Italian Daze”, in its quirky way answers the questions its own stories raise simply by being exactly what it is: a fiction of the nonfictive experiences of the narrator who just might, or might not, be the author.