In anticipation of its international release in September, ytali.com is pleased to publish the first of an exclusive series of interviews with the photographers from the English/Italian publication “Dream of Venice in Black and White.” We thank Bella Figura Publications for this investigation into the art of photography dedicated to Venice.
scritto da JOANN LOCKTOV 10 Giugno 2018

The wonderful Venetian author, Alberto Toso Fei, says of Venice, that she was a photograph before the invention of the darkroom. For over a mere century photographers have been trying to capture her spirit with a camera. What does a photographer look for when photographing one of the most photographed places in the world? I asked seven of the photographers from the forthcoming book: Dream of Venice in Black and White to share their thoughts. Their experiences reflect their attitudes towards the city, perhaps even more than their expertise. 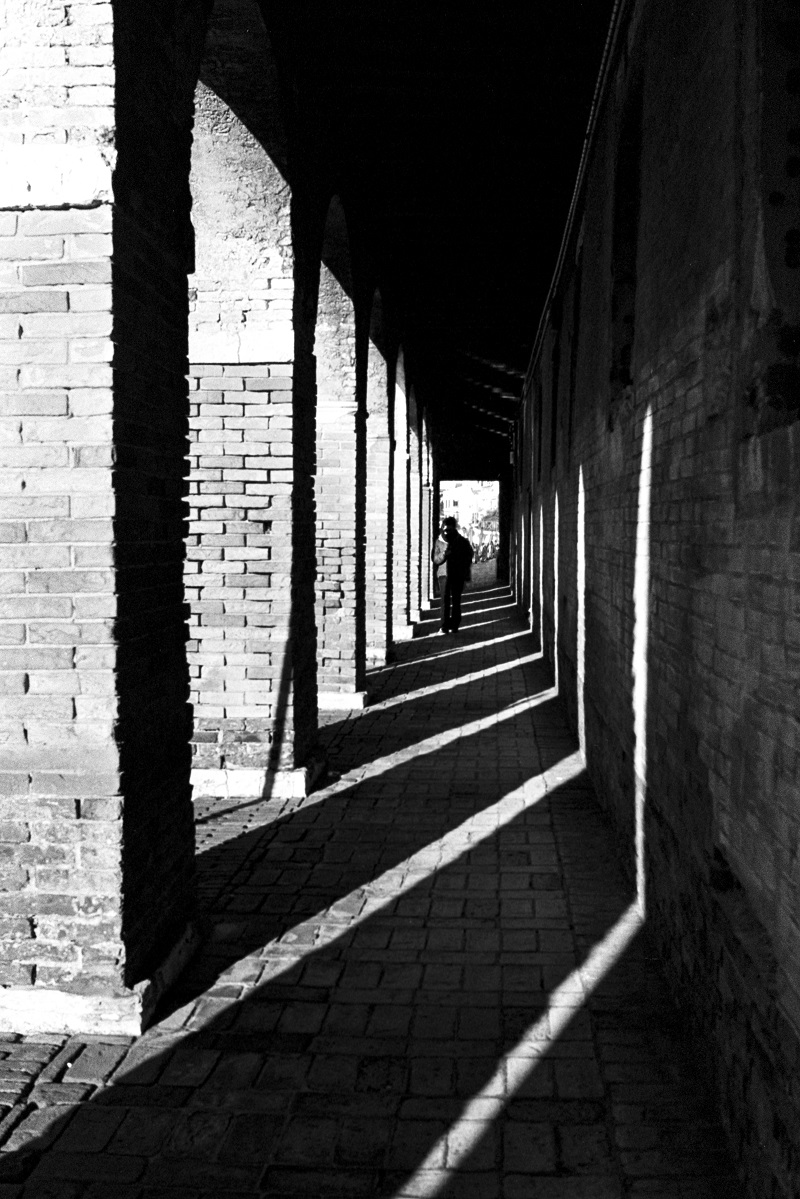 Venice is a so astonishing and still a changing place that it is possible for a photographer to spend decades along canals and fondamenta eagerly looking for the shot of a lifetime. This is particularly true if we are talking about a person like me with a special attraction for “razor sharp” black and white contrasts. And, in this sense, the sestiere of Cannaregio is the ideal environment to explore. When the Cannaregio was drained in the eleventh century, three long canals were created, running parallel to each other. Straight, long canals are quite rare in Venice; here the calm water surface is efficient at capturing and reflecting the sharp rays of the rising sun or mirroring even the most subtle of light’s vibration. My style has naturally adapted along the years to such unique conditions. In few words my simple “recipe”: shots most of time taken in the Cannaregio, just in the morning and frequently in winter time, loving the first rays of sun but also the flat days of fog. Then wait, wait and again wait for a single person to be part of the scenery. Last, very important: look with your eyes and not through a lens and… do not waste shots (I’m still using a film camera). The “Labirinto”, taken in “Sotoportego de l’Abazia” at the end of the long “Rio de la Sensa”, in a freezing and super-clear morning of January, is well representing the “juice” squeezed out from those so peculiar “ingredients”. 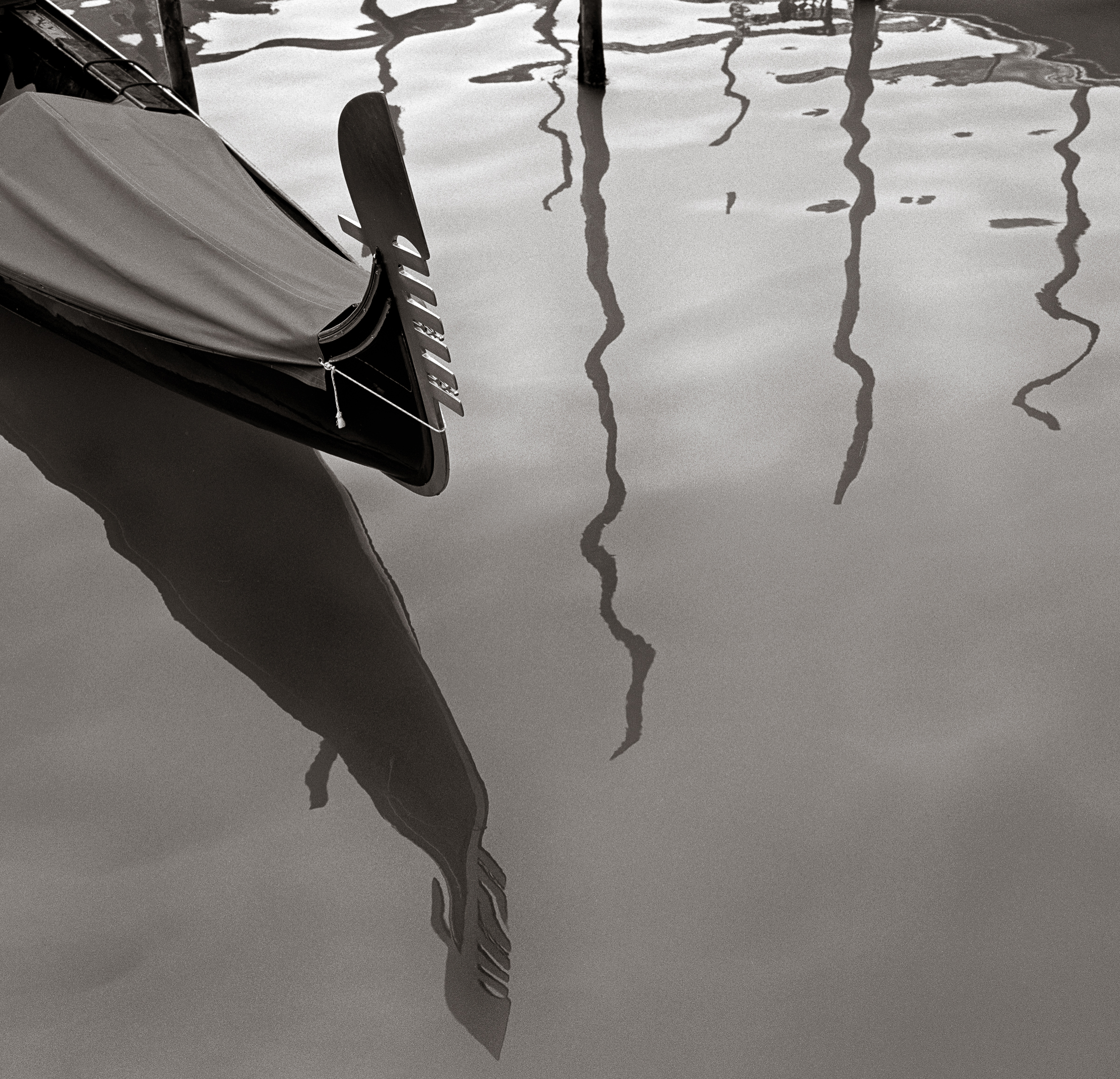 For a photographer who is regularly captivated not only by the beauty of line and form but also by the endless fascinations of reflections, Venice is a watery paradise. Reflections, for these eyes, are ephemeral and otherworldly; they have surreal qualities—much like those Venice itself possesses—as ever-changing, shape-shifting phenomena full of mystery. I love to wander the small canals where one can encounter the quiet peace of docked gondolas, gently rocking in the small movements of the canal’s gentle flow and reflecting the fluid contours of the craft’s unique lines. The interactions of the graceful curves of the gondola’s  ‘ferro’ or prow with that which is the very essence of this dream-like place—the ever-present water itself—can create true magic. Irresistibile! 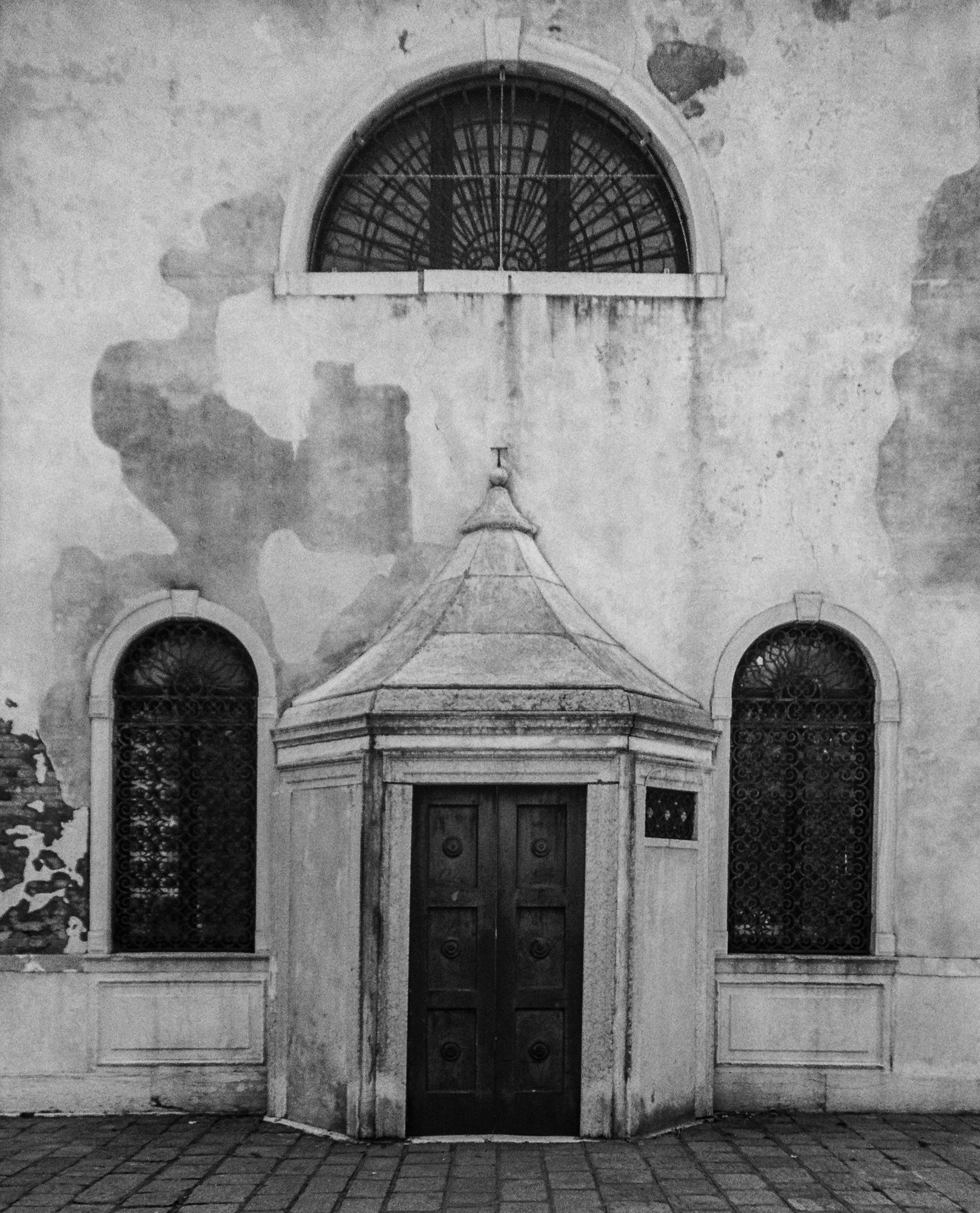 I first became aware of Venice when I saw the movie Blume in Love. The melancholy Blume mourns the end of his marriage wandering around St. Marks Square. I too arrived in Venice, the rain making the skies moody and gray.  Wandering around like Blume, getting lost on purpose, I found this little building with the Moorish influence. A love affair breaks apart, but the remnants… 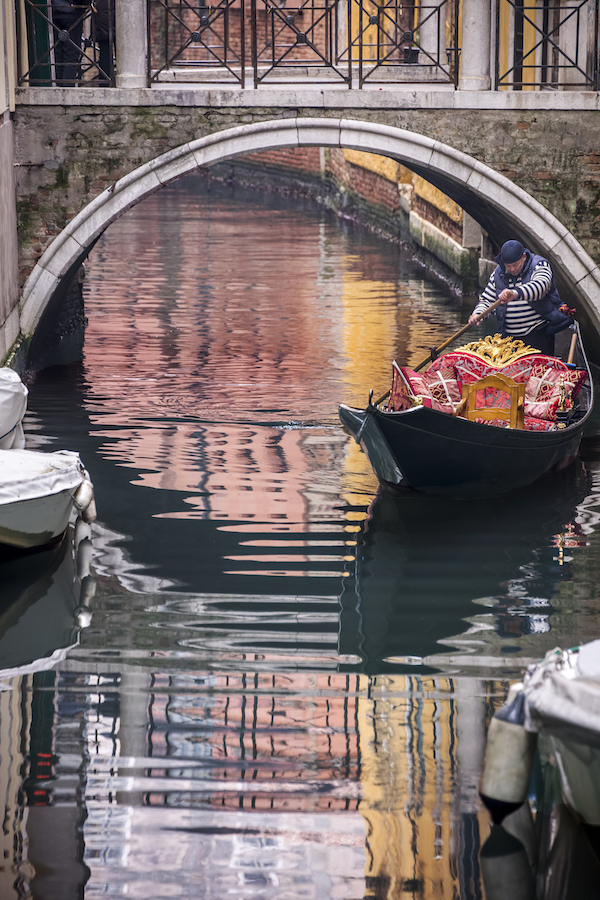 Venice is a relatively small city. Yet in the month I spent there when I was shooting for my book, Reflections of Venice, and for the upcoming Bella Figura book Dream of Venice in Black and White, I averaged 10 miles on foot every day. I only took a vaporetto when I needed to get out to the Giudecca or Burano. I crossed the same paths, walked over the same bridges and down the same alleys many, many times. Each location was different every time I passed. Photography in Venice is just as much about the when as it is about the where. What time of year? What time of day? Rain? Sun? Fog? Snow? These are just as important to consider as “where” in the city to shoot. Personally, I was looking for reflections – reflections in the canals and reflections during acqua alta. For the canals, my preference was the small rii in San Polo and Castello, well off the beaten path. For acqua alta it was the Piazza and Piazzetta di San Marco, the Bacino di San Marco and to a lesser degree, near the Rialto bridge – the lowest parts of the city. The “when” was usually in the quiet of very early morning, before the tourists filled the calli and before the boats roughened the water in the canals. I was out before dawn almost every day. 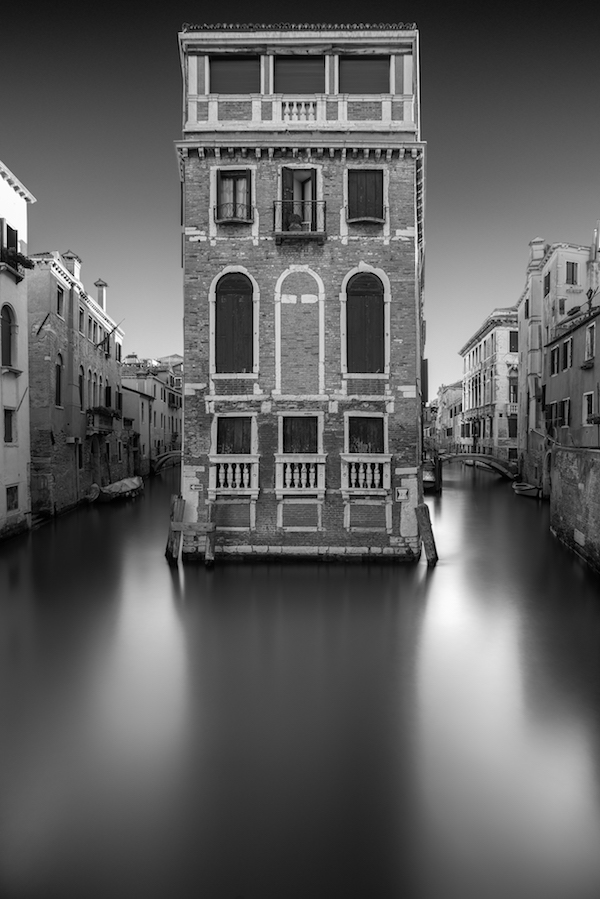 Venice for me is one of the most photogenic cities in the world. There is a photo to be taken around every corner that couldn’t be taken in any other city I’ve ever visited. From the classic gondolas and the grand churches to the quiet little corners with its friendly locals.

One of my favorite things to photograph in Venice is the wonderful view from Calle Bragadin o Pinelli. It’s a beautiful iron bridge just before where the canal splits either side of an old house. Away from the hustle and bustle it’s a peaceful place to take your time and create some nice art. 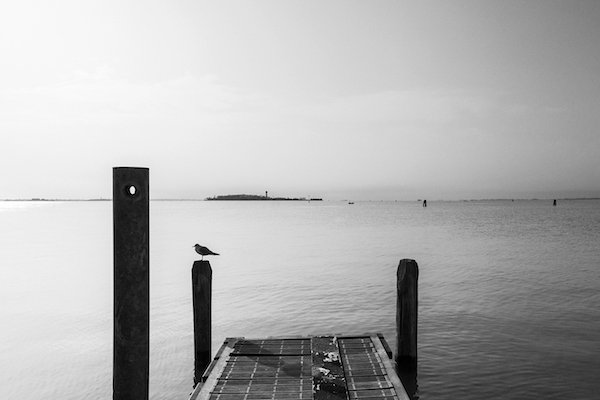 Venice is a city that leaves space for thoughts and feeds on feelings.  You are in complete touch with yourself.  Once aware of this, Venice develops a sheaf, you traverse it as breath through the body and animates it.

Among the small crowded streets, supervene thoughts of every day life. Then, each step brings you to rediscover something asleep.  In the moment of maximum loss, the canals cuddle you towards the chosen destination.

Like in a body, following the great canal, principle artery of the city, you reach that intimate and solitary space where conscience has freedom to expand: The Giudecca.

The following of thoughts leave place for meditation. The metaphysical landscapes, the silence that accompanies you, is a gift of that desired suspended moment.

Venice is the belly of the world that knows how to listen to your breath that cradled you as in the belly of a mother.  You feel understood, between the knowledge of yourself and the freedom to dream. Yes, Venice is woman. 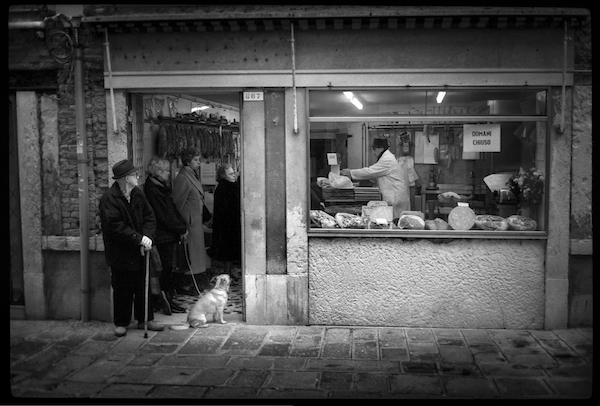 In 1999 I purchased my first point and shoot 35mm film camera the Contax T2 in preparation for the dawn of the new Millennium, the year 2000, which my wife and I were to spend in Venice.  It was wonderful!  Hanging off my wrist, lift up, frame and bang, press the button when you think it’s right…the camera did all the thinking to get it right on most occasions.  The T2 has a 38mm Ziess lens that slips back inside the body when powered off, considered the ultimate in point and shoot lenses ever produced.  Put on a red filter and off you go.  I started looking for suitable moments to shoot and realized that it had to be without visitors or tourists in shot, not necessarily in iconic locations.  This meant rising early, sometimes pre-dawn before the calli and campi fill with people other than Venetians going about their morning routines and it also acted as an excellent opportunity to join the locals in their ritual of scoffing a cafe corretto or two on their way to work and me between snaps!  This helps with the way you see things I find.

And so I had a theme of finding mostly singular figures amongst the stunning Venetian architecture shot either in light mist or the hard, low sunlight that sneaks into the city at sunrise. This is why I keep coming back and why I love capturing images like these in this remarkable city of Venezia.

Link:
“Dream of Venice in Black and White” 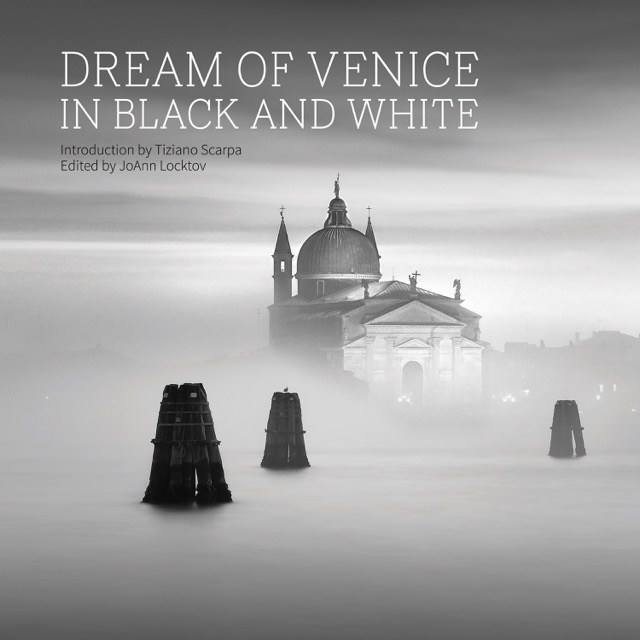