"The choice of black and white was dictated by the need to make the human being emerge in what was often an environment full of colours, from red to yellow, from green to blue, making them easier to read"
scritto da JOANN LOCKTOV 15 Agosto 2018

You are Venetian, born and raised on Murano. How difficult is it to see your city objectively, when it is the place you have lived all of your life?
Living in Venice can definitely make it difficult to see the extraordinariness of this city, yet I can still be amazed by how wonderful it is.
Waking up here every morning becomes a strength, because I can allow myself to photograph Venice with the right rhythm, not in a rush and without letting myself be seduced by what are the classic stereotypes, photographed in the same way by tourists from all over the world.

How did you first discover photography as a creative expression?
At the end of the 70s, I was able to see some of Cheyco Leidmann’s photos for the first time and from then on I realised that with a camera you can do much more than just take souvenir photos.
Now I prefer photographing with the intention of documenting, without worrying about whether or not I am being creative. This doesn’t mean that I am taking pictures in a superficial manner, I am always attempting to have total control over what will be the end result. 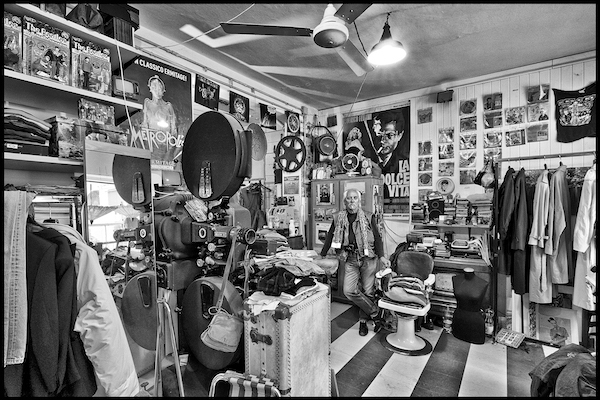 Originally you were a draftsman on Murano in the creation of chandeliers. Did you have to retrain your eye (your sense of proportion and distance) when you discovered photography and decided to pursue it? Are the two skills compatible?
Since I was a child, drawing has been one of my greatest passions. For some years I even had the opportunity to work as a draftsman on Murano, designing chandeliers in classic style. That brief period of work definitely helped me understand the delicate balance of proportions that should be in an object if you wish it to be pleasing to the eye.
On the other hand, I do not believe that there are many similarities between artistic drawing and photography, the artist starts from a blank page and has no limit, whereas the photographer will always have to deal with the reality in front of him and with the photographic equipment at his disposal. 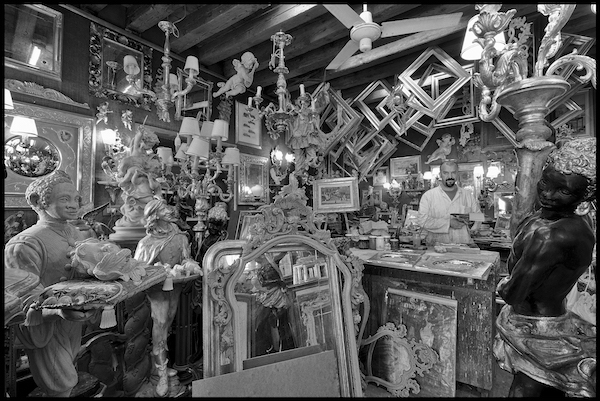 Your two photographs in Dream of Venice in Black and White were taken in winter on a very frigid and rainy night. Not many people will endure the cold and wet on such nights to take a photo. Were you seeking a certain shot that could only been taken in this specific atmosphere?
To tell the truth, it was thanks to a friend of mine who asked me to accompany him on a nocturnal photography expedition and convinced me to leave the house at midnight in full winter.
I really love to photograph at night, because during the night Venice becomes magical and mysterious, even though I usually prefer to do so during the summer.
The rain started when I was already in Piazza San Marco, which at the time was beautifully embellished by the Christmas lights.
With the rain, the surface of the canal Rio de Palazzo rippled, causing the reflection of the Bridge of Sighs to become an indistinct shape, thus making it less invasive in the final composition of the photo “The guardian of time”. 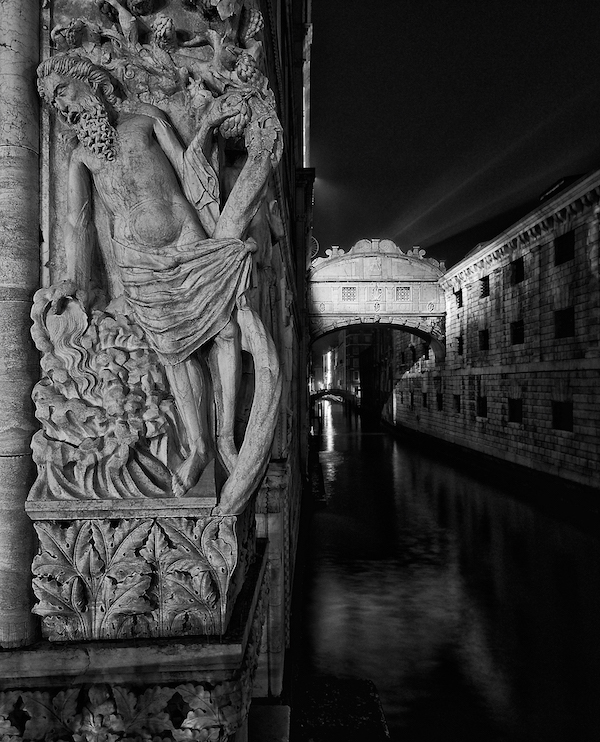 Angelo Rigoni, 2015, The guardian of time

The Bridge of Sighs is one of the most photographed landmarks in the world. However in your photo, you focused on the Drunkeness of Noah, the13th century sculpture, in the foreground, with the bridge almost as an after thought. Is Noah the” guardian of time” in your title? Can you tell us what you were thinking when you composed the image?
When I compose an image, I endeavour to ensure that all the factors within it have the same weight, dark/light, full/empty, even though finding the perfect balance is not always easy.
In the case of the photo you mentioned that is featured in the book, priority was given to the sculpture of the Drunkenness of Noah, which is more than 300 years older than the more frequently photographed Bridge of Sighs.
In this case, Noah becomes the protagonist, when usually he is only the silent observer of the passing by of the millions of tourists that often do not even deign him with a glance, enraptured by the beauty of the much more famous Bridge.

You’ve remarked that August Sander, the brilliant German photographer, is an inspiration. Sander elevated individuals through his portraiture, imbuing them with dignity. The portraits in your new series “My photos… their stories” seem to share the same intensity, although photographed very differently. You’ve chosen to surround your subjects with the tools of their trade, be it shoes, or frames, or hammers or hats. The portraits feel like a cacophony of pride, skill, environment, heritage, and identity all merged into one marvelous image. Can you tell us how the portraits evolved to be photographed in this unique style?
For the project I am currently developing, with the entirely provisional title “My photographs…their stories”, I was in effect inspired by August Sander’s work. In his monumental research he photographically documented hundreds and hundreds of people in their regular work clothes, but he rarely contextualised them in their work environment, which I perceived as a lack of information that I consider to be of immense importance.
Those who spend a lot of their time in their work environment, modify and personalise it, in some way they make it a part of themselves. To me, the human and the environment become inseparable.
The search for the rigorousness of the lines comes from my love of architectural photography and specifically for Gabriele Basilico’s work.
I am convinced that the style of an image cannot be but the summary of what the photographer knows, loves and, in some ways, re-elaborates. 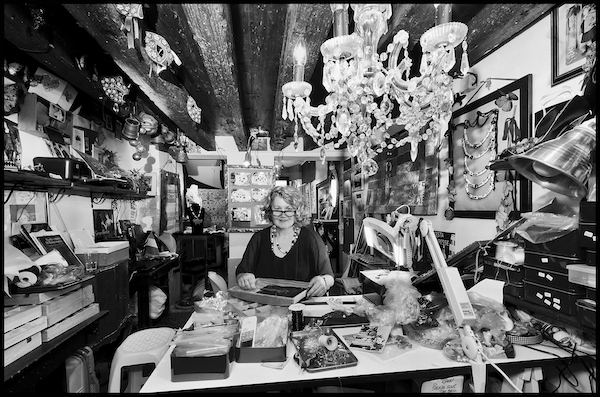 In these portraits we often have to look beyond the labyrinth of objects to actually find the human being. They feel like a metaphor for the rapidly declining population of Venice. Are there any parallels between the way you’ve chosen to create the portraits and current situation Venice?
The choice of black and white was dictated by the need to make the human being emerge in what was often an environment full of colours, from red to yellow, from green to blue, making them easier to read.
It was never my intention to use these images to denounce the current situation in Venice. It is true, this delicate city has changed, it has changed too much and too quickly and it definitely has not improved. But while I got ready to shoot, my only thought was to find the right frame and exposure to bring out as many details as possible, I was trying to tell a story through a single image.
I also consider it to be a true privilege to converse with each of these people before I take their picture. 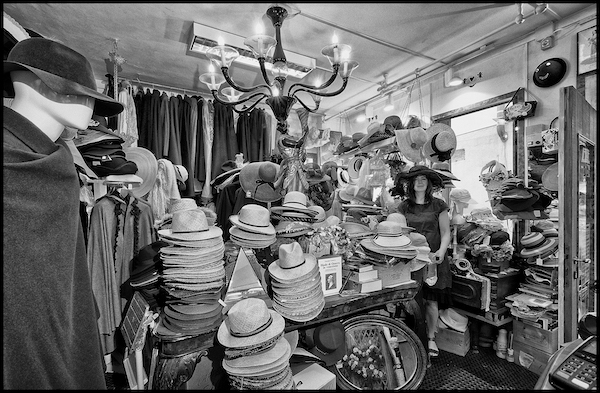 Eva Sipola: Storyteller with a Camera