“The Cold Civil War”. A conversation with Sidney Blumenthal

For the past few years, Sidney Blumenthal has been busy writing a monumental biography of Abraham Lincoln. The third volume will come out next September and will certainly be as well-received as the previous ones. The work won’t end there as there will be five volumes in total and it now takes up much of his time, but not nearly enough to distract him from politics, his true passion and, for many years, his job.

He was already a well-known young journalist when we first met him in Boston to talk about his book, The Permanent Campaign. It was he who, in the early 80’s, invented those three words which perfectly described the radical changes that were beginning to take over American politics, with the emergence of political consultants, pollsters, and other such devilries; all of which, as the title predicted, would transform political debate into permanent campaign.

Shifting from journalism to direct political commitment, he became senior advisor to Bill Clinton in the White House and, years later, to Hillary Clinton. He has a rare insider’s knowledge of American politics, of power relations in Washington and of the dynamics within  the Democratic Party. Today he is on the sidelines, and looks on with a mixture of indignation and preoccupation as he witnesses what he calls a “cold civil war” that polarises America more and more, but which he expects will end up crushing trumpism.

This is what he shared with us over the phone the day after the midterm results.

My impression is that this [the mid-term elections] was a profound rejection by the popular majority of Trump and the Republicans. It was more profound than even is registered in the offices that have been gained. While the Democrats won the House and lost seats in the Senate, the Democrats won overall votes for the Senate by more than 10 million over the Republicans. What we are dealing with is a political party (the Republicans) that has put the nation in a vice, in order to maintain control despite the fact that it is an increasingly minority party. And the Republicans are essentially at war with the majority of the nation. As a result, the US is engaged in what I would call a “cold civil war”, that will not be resolved anytime soon. So, the Democrats winning the House means that the period of the first two years of Trump presidency, in which he and his party had total control, is a thing of the past. And he will be subjected to intense investigation. Not only to protect the investigation into the Russian interference into our politics by Robert Mueller, but also the pervasive corruption of Donald Trump, his family – which operates like a mafia family – and his cabinet and the White House, which is presiding over a vast kleptocracy. We’re about to see dozens if not hundreds of investigations into the greatest scandals of American history. 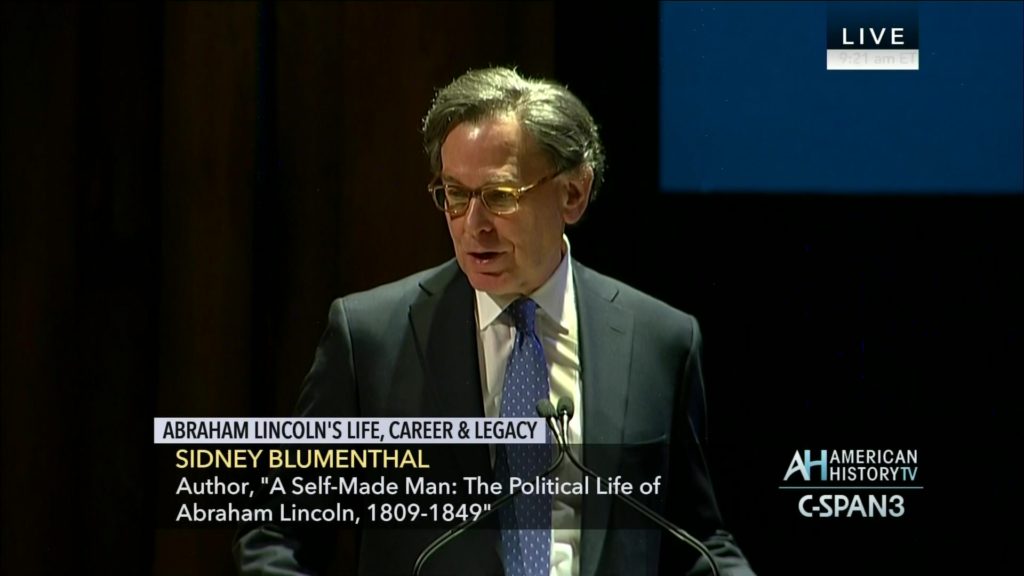 In a tweet, Donald Trump threatened democratic congressmen: if you investigate me, the Senate will investigate you…
He’s scared, he’s desperate and he’s lost control. He’s trying to engage in tactics of intimidation.

The Republican Party, which deplored him when he first appeared on the scene and during the primaries, is now his party. He can order the GOP senators to carry out crazy things, such as opening investigations on democratic congressmen who dare challenge him.
Yes, but he doesn’t completely control the Senate. And what are they going to investigate? This is what people call ‘gorrilla dust’, where a gorrilla will throw dirt in order to try and make enemies go away. That’s all it is.

There have been many presidents who have seen Congress, or one the two Chambers, pass over to the opposition. It happened to Bill Clinton, when you were the president’s advisor at the White House.
The Senate and House are very different chambers in their approaches and as institutional bodies and even under the Republicans the Senate is more hesitant and more slow-moving. But when the Republicans gained control of the House in the elections of 1994, that led eventually to the impeachment. And we’ve seen under the first two years of Trump what happens when the House is controlled by the Republicans. But with the Democrats in the majority we will now see, I predict, hundreds of investigations into corruption.

Nancy Pelosi [likely to become the new Speaker of the House] seems reluctant to launch a frontal offensive against the president…
I think the Democrats will do this in a way that will appear to be conducting a fair process and evaluating evidence as it appears. So they want to see what is there. And once it emerges, then they can make statements about it. But they will not hesitate to investigate. Let me say one other thing about Trump’s recent conduct during this campaign. There has no other president ever in American history who has conducted such a campaign as Donald Trump has in these mid-term elections. As vile and contemptable as he was before, he has reached new depths of despicable behaviour. He has waged the first campaign in American history, also reflected by his party, that his anti-semitic. Openly anti-semitic. Against not only George Soros but also running ads against Jewish candidates with anti-semitic stereotypes, with pictures that were fabricated of them holding money. This incitement indisputably led murders in the synagogue in Pittsburgh of 11 Jews. This incitement [also] led to a Trump supporter in Florida to send letter-bombs to prominent Democrats and former government officials. Trump also ran a racist campaign, against immigrants and women’s rights and against women’s dignity, and he did so openly. The Republican party has been redefined by that, that’s who they are. They are not an ordinary political party anymore, in the normal sense of American politics.

With tangibile consequences on the political climate in other countries. We need only think of Europe, of Italy.
Yes, of course. It has enormous international influence and provides an example and encouragement to neo-fascists around the globe.

How do you see the Democrats after this electoral test? Can they find a common line, some sort of cohesion which might lead to success in the next elections?
We’re about to enter into a period of great conflict and a reckoning over the Trump presidency, and that will redefine the contest to come. Ultimately, it’s a question of whether the US will be true to what it always has been since its founding, in the Declaration of Independence, which proclaimed that “all men are created equal” and that the country was united around its values, ideals and principles or whether we are to be a country united by essentially white nationalism, race, anti-semitism and patriarchy. That has never been so starkly put before Americans.

Truth be told, this America which lives under Trumpism wasn’t actually Trump’s invention.
It’s not his invention, it’s always existed. The US fought a civil war, part of the US, a large part, broke off to form a separate nation – the Confederate States of America – in order to preserve, defend and extend slavery. It was a counter-revolution against democracy and it is not accidental that the problems emerged in the last elections, with the rejection of more accomplished, more dedicated and superior African-american candidates for Governors in Georgia and Florida. Faith is the problem of the South, that’s also what Beto O’Rourke faced in Texas. A part from difficulties in Ohio – which is a split state between the north and the south – what’s interesting is that three northern states that gave Trump his very narrow margin of victory in 2016 have revolted against him, and thrown out the Republicans: Pennsylvania, Michigan and Wisconsin. So there is a northern and a western revolt going on against Trump. That’s why I call it a cold civil war, it’s another aspect of it. You know, we are still living out our history.

We must also admit that recent data show a rather healthy economy…
That’s a separate issue. Trump is, in my view, attacking the fundamentals of economic well-being. It took two terms of the Obama administration to set the economy on a firm basis after the big financial panic and collapse of 2008-09. But Trump has provided a regressive tax cut that favours the very wealthy. [He has provided] what analysts typically call a ‘sugar rush’ to corporations which have not engaged in productive investments but in share buy-backs and that has lifted some equities but that sugar rush runs out and creates a kind of economic diabetes; in the form of the Federal Reserve raising interest rates, which they have begun to do because Trump flies in the face of Keynesian economic theory. When you’re meant to engage in economic stimulus when the economy begins to down-turn, instead he has done it when we’re in an up-turn and exploded, as far as the eye can see, the Federal deficit; which has then provoke the Federal Reserve to raise interest rates which will have negative effects on growth. At the same time, instead of operating through the rule-of-law-based trading system that the US so carefully created with our allies after WWII, beginning with the Bretton-Woods Agreement and then the encouragement of the process that led to the emergence of the European Community and the European Union. He has abandoned it for an atavistic, anachronistic version from the 19th century based on trade-wars and the imposition of crude and blunt tariffs as weapons. His use of these weapons is based on ignorance of the true workings and operations of the global economy: the international chains of supply, the nature of finance, the labour markets and so on. But to accuse Trump of ignorance is not an accusation, it’s a given.

It’s a fact.
Yes, it is a fact. His ignorance is universal, on all subjects.

He’s proud of his ignorance.
He is belligerent in defense of his ignorance. The reason that the economy – which is fundamentally OK – is suffering ups and downs and the nervous reactions that simulate a boom and bust, has to do with Trump’s economic ignorance and attacks on the economy. That is my view of what’s going on. I believe that he is seriously hurting American workers and farmers. The auto industry is cutting back and will move parts of its production overseas, and American farmers, particularly in the mid-west, are suffering enormously from his trade-war with China, especially those who produce soy beans. So we’re just at the beginning of the damage that he’s beginnig to do, of the distortions that he’s imposing on the economy. So when people say “the economy’s great, why doesn’t he run on the economy”, well, first of all, most Americans don’t support the tax cut and so if he did run on it, it wouldn’t work. What worked for him in the mid-term was anti-semitism, racism, nativism, misogyny. That’s what works for him. That’s what moves his base.

Is it possible that, with all the trouble coming his way on the domestic front, he might even consider military ventures outwards?
I don’t know, but certainly John Bolton is ascendant; he’s a hostile character and I believe James Mattis, Secretary of Defense, will be removed. He has been a force for some moderation on Trump’s stupidity and belligerance. I believe the Trump administration, while it still makes strong hostile statements, is in fact drifting and is subject to enormous manipulation by foreign powers. Not least Russia, Saudi Arabia and the Netanyahu government. Trump is so psychologically damaged that he personally responds to Kim Jong Un’s flattering letters and thinks that the sentiment in them is somehow genuine about what a wonderful person Trump is. No one should ever underestimate Trump’s perverse narcissism, and its consequences. We are all prisoners of Trump’s pathology.