"Many a great photographer is or was alone. When you are alone you can enter in a sort of meditation because nothing is disturbing you. You are walking like a stray dog and you are with your thoughts and the world around you. Then you can catch that decisive moment.  I express my solitude by capturing lonely people on the street"
scritto da JOANN LOCKTOV 15 Novembre 2018

How did Venice entice you from your home in Zagreb?
It is very common for people from Zagreb to visit Venice, at least once in their life. Almost everyone I know has been to Venice. I’ve been there a few times during my life but two years ago I was in Venice with the intention to capture street photos in wintertime, when Venice is not crowded with tourists. I was there on photo trip with my friend, the photographer Stanko Abadzic, who is an internationally famous street photographer from Zagreb. We walked far away from the tourist spots and took great images, especially night shots.

You are a film director as well as photographer. How does your work in moving pictures influence your work in still pictures?
Yes, I’ve graduated at Drama and Film Academy Zagreb (ADU) but I had very little chance to make movies, just two documentaries. After that, I spent many years as cultural manager. But when I lost my job, a few years ago, I grabbed a camera, which saved me from depression. The artist in me was reborn. I’ve transferred the documentary interest and feeling from movies to photography. And of course my knowledge about scene, light, composition etc. helped me to become recognized in the international street photography scene very soon after I began. 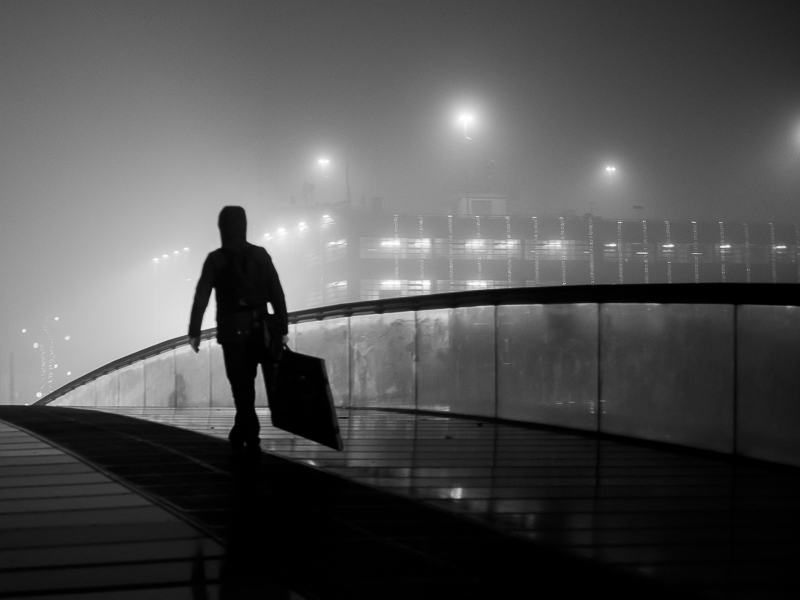 Your nocturnal photography has a suggestion of film noir. Individuals, often alone in silhouette, feel like they could be in menacing situations. What are the elements that only the night offers, which help create your narrative?
Night is magic. I adore film noir. One of my favorite movies is “The Third Man” with a lot of brilliant night scenes. In photography I like the night photos from Brassai in Paris. In Venice I had a chance to capture this night magic with fantastic architecture scenography, beautiful light from street lamps and very interesting people, some of them dressed as if they came from the past. Everything seemed as if a time machine had moved me backwards. And I love it. My own emotions plus great surroundings was a reason why my “Venice in Winter” photos are loved by people and why this series has received many awards and international exhibitions. And of course, a reason why two of my photos were chosen and printed in the beautiful book Dream of Venice in Black and White. 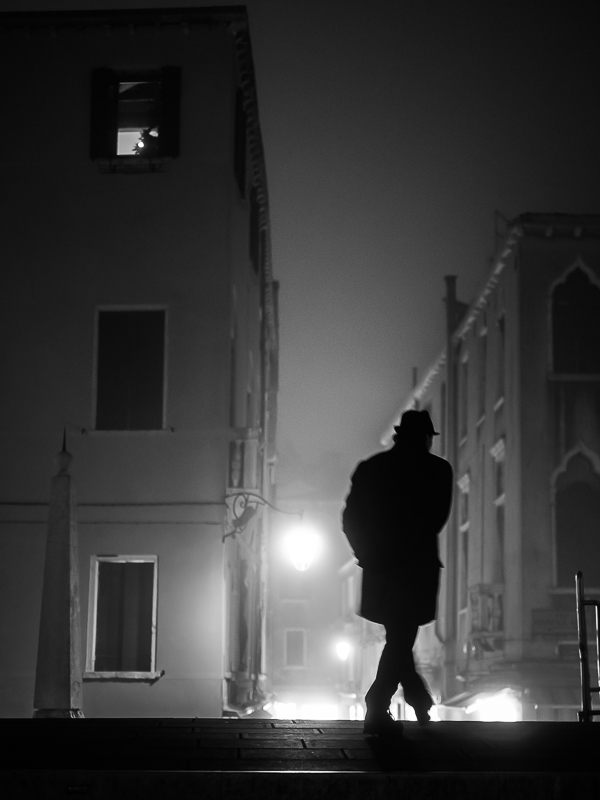 One of your two photographs in Dream of Venice in Black and White is a pensive portrait of a gentleman who is facing you but looking past you at something that we can’t see. What were the circumstances that led to this image?
OK, I will tell you a secret behind that photo. My friend the photographer Stanko and I were walking in the late evening and I spotted this gentleman and prepared to take his photo. I was ready to shoot and then my friend said “Scusi signore!” It was just a second when he turned around, and I captured him. After that, my friend and I took several photos of him with his consent, but only my first one captured that decisive moment as in Cartier-Bresson’s photos. 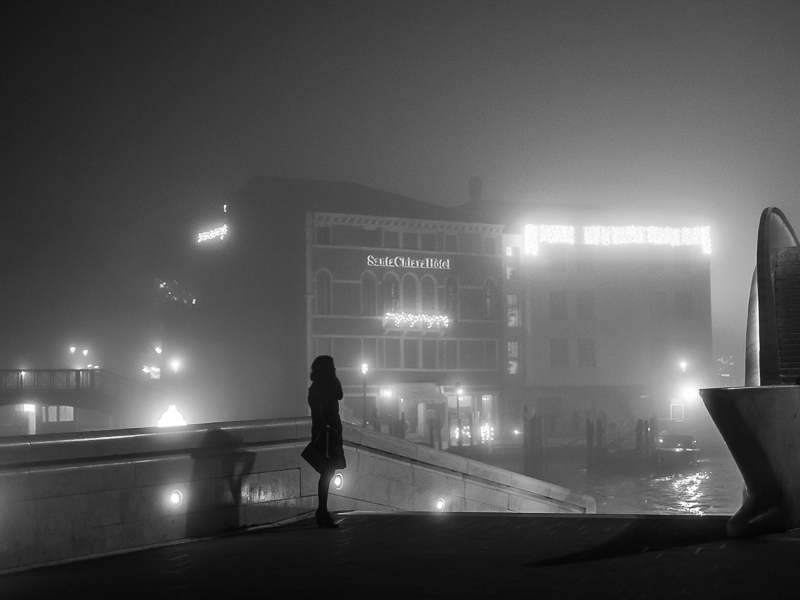 Your recent exhibit at the Synagogue culture center in Maribor, Slovenia had the compelling title “The Privilege of Solitude”. This is a unique way to categorize solitude, which often equates to the more negative aspects of loneliness. What does the privilege of solitude mean to you personally and how is it represented in your work?
Well, solitude is more and more our reality in today’s world. It is a paradox but people who are living in big cities are very lonely. But solitude has some advantages. You have more freedom, especially if you are an artist. Many a great photographer is or was alone. Just to mention Daido Moriyama. When you are alone you can enter in a sort of meditation because nothing is disturbing you. You are walking like a stray dog and you are with your thoughts and the world around you. Then you can catch that decisive moment.  I express my solitude by capturing lonely people on the street.

Giulio Zanni: Stripping Down the Hallucination

Eva Sipola: Storyteller with a Camera