Europe at a crossroad, and so too trade unions. Interview with Andreas Bieler

“Organised labour has realised it needs a much broader agenda to stay relevant, so it is starting to participate on issues such as water or energy democracy”, highlights the professor of political economy
scritto da MATTEO ANGELI 26 Gennaio 2019

From the early 1980s onwards, workers’ rights across Europe have been greatly cut back, especially with regards to collective bargaining and trade unions’ involvement in government decision-making. GDP kept growing, but the distribution has been so uneven that many people have lost out as a result. Is there an alternative to this that might lead to greater social equality? We discussed this with Andreas Bieler, Professor of Political Economy and Fellow of the Centre for the Study of Social and Global Justice at the University of Nottingham. He is author of several books and scholarly articles, including Global Capitalism, Global War, Global Crisis (with Adam David Morton) (Cambridge University Press 2018) and The Struggle for a Social Europe: Trade unions and EMU in times of global restructuring (Manchester University Press 2006). 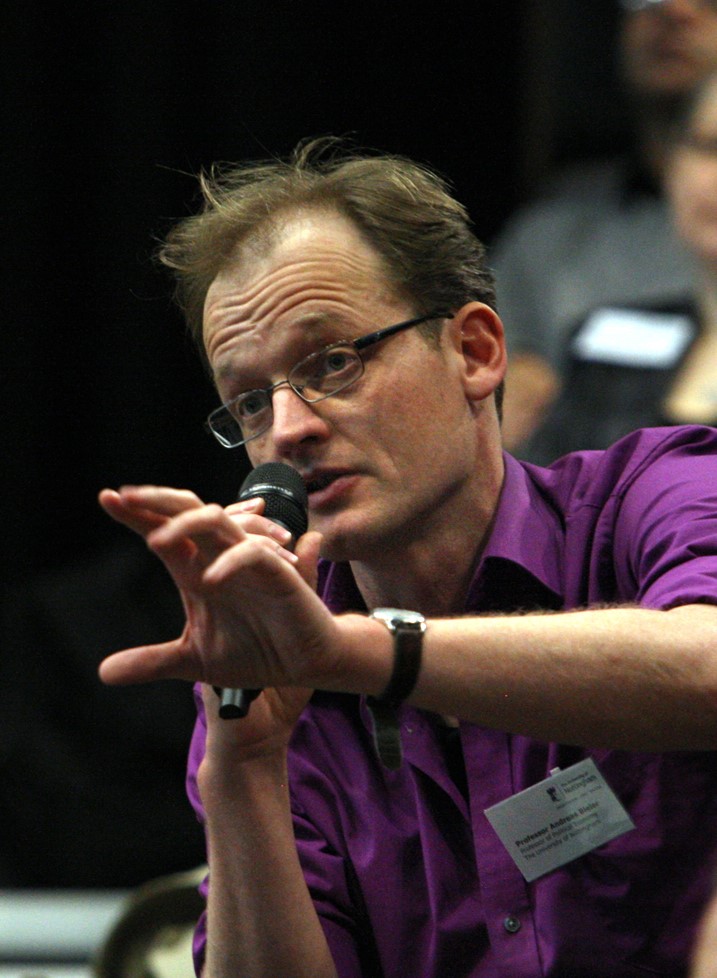 Professor Bieler, as you have written on several occasions, the project of European integration involved a restructuring of the organisation of production on the continent. Who are the winners and who are the losers of this process?
It’s really part of the restructuring of globalization. Especially from the early 1980s onwards, production structures have been increasingly transnationalised in Europe and across the world. And that has resulted in the emergence of what some refer to as a transnational capitalist class, which has become an increasingly important actor and ultimately underpinned the shift towards neoliberal economic policies.

Of course, the main argument is that you need to liberate market forces, to let them roam freely and ultimately everybody would benefit through this trickle-down effect. What we are seeing in practice as the result of this restructuring is: firstly, the rights of trade unions have been curtailed across the EU, especially with regards to collective bargaining and trade unions’ involvement in government decision-making; secondly, workers’ rights themselves have been greatly cut back. As a consequence, there has been a dramatic increase in inequality and flexibilisation of labour markets across the EU. Even in good economic times, this kind of precarity creates workers who no longer have the stability of those in regular work, so in times of crisis such as these the problem is simply magnified.

Now, everyone looks at Germany as an economic powerhouse, but actually the increase in precarious contracts in Germany is one of the highest in Europe; there may be some economic upturn at the general GDP level, but the distribution has been so uneven that many people have lost out as a result.

You mentioned neoliberal economic policies. I would say that in Europe the dominant alternative to those seems to be nationalism. What are the main differences and similarities between these two “doctrines”?
The austerity cutbacks people have been suffering from ever since the global financial crisis derive from neoliberalism, which has resulted in massive unemployment, the situation in Italy being a key example. People are fed-up and extremely worried about their livelihood and their future, and this does not automatically imply that as a result you would have a progressive left strategy, vis-à-vis capitalism or neoliberalism.

Quite the opposite, we see forces on the right, with nationalist and even anti-foreigner rhetoric, who abuse the current crisis to further their own interests. Nationalism cannot be a progressive force, but it is an increasingly strong one at the moment. At first sight, nationalism contradicts neoliberalism which of course advocates open borders and free movement; but at a deeper level, if we look at the Brexit argument in the UK for example, those conservative figures who say they “want to take control of our borders” are often representatives of neoliberal capital. And I think the latter struggles to offer the gains they had promised, making the people more restless in turn. It has become a strategy of sorts to carry on with neoliberal economics and keep borders open for the movement of capital, while blaming foreigners for the resulting problems by playing the nationalist card as a way of ‘distracting’ those, who have lost out. Unfortunately, then, this right-wing nationalism is not a contradiction to neoliberalism.

There is also a small group on the left that argues that the UK outside the EU would find it easier to establish socialist policies internally, and that variety of nationalism would in theory be in contradiction to neoliberalism. That said, I don’t think it’s realistic to pursue this strategy today, when economies have become so tightly integrated across borders.

Apart from this specific case, is there in Europe an alternative to neoliberalism that might lead to greater wealth redistribution and social equality?
It’s always possible, the future depends on class struggle after all.
Back in 2002, I participated in the European Social Forum in Florence, where there were between 40 and 60 thousand activists together. That was the high-point for the left in Europe, and one could feel the hope for a left alternative. If we look at what has happened since then, we have less reason to be optimistic.
In November of last year [2018], I attended the Bilbao European Forum, organised by European left parties with some green and Marxist movements too, and there were only 450 participants. So, the prospects of an alternative left are not very promising at the moment, but there is no reason to give up.

Which struggles should an alternative left begin to tackle first?
Struggles around public water such as the 2011 referendum in Italy are very encouraging. There has been a European citizens’ initiative on water as a human right in 2012/2013, as well as a successful fight in Ireland against water charges in 2014-15. So, water is one of those areas of successful mobilisation on a national, European and global level.
Another hopeful example would be the Stop TTIP [the Trans-Atlantic Trade and Investment Partnership] campaign, where there was also a wide mobilisation of trade unions and movements across Europe.
So there are struggles in which the left comes together. They give some hope for a future progressive alternative to neoliberalism.

Could the environment, as big a topic as it is, become a northern star around which the left can build a new strategy?
If the left wants to be successful in challenging the dominant system, it needs to incorporate all types of different actors, trade unions, social movements, NGOs. If, however, trade unions narrowly focus only on issues to protect their own members’ interests then that becomes an obstacle to wider organisation.
Fortunately, many trade unions have realised that they need a much broader agenda to stay relevant, so they are starting to participate actively on issues external to their realm, such as policies on water or energy democracy. These are all issues which also relate to the environment and here especially the problem of climate change.

In France yellow vests protests show limits of consumer acceptance on climate change. With regards to this movement, bringing together different interests is both its greatest strength but also its main weakness. How do you think this movement might evolve to achieve the changes it strives for?
I’m no expert on the yellow vest movement, but it seems to be a protest against the continuation of austerity policies by President Emmanuel Macron. A protest by those who have lost out during the process of European integration. There are some very progressive elements next to other xenophobic populist forces as part of the yellow vests, so finding a common ground of demands is extremely challenging.
What is clear is the unrest felt by a vast number of people, who find it increasingly difficult to lead a meaningful life because of the economic cuts.
It remains to be seen whether they are going to be a progressive force or not.

It seems that in Europe capitalism is no longer able to guarantee full employment. In Italy, the Five-Star Movement is advocating for universal basic income, although their version is actually not what it says on the tin. Nonetheless, is the idea of universal basic income a viable solution?
It would certainly be better to have basic income than to rely on austerity measures and precarious jobs, but to have a truly fundamental shift other changes would have to come into play. There is more than enough wealth being created, it’s a distribution problem. A larger problem still is the way production is being organised, based as it is on a race to the bottom with precarious contracts. Ultimately, however utopic it may sound, it would be necessary to step beyond the capitalist social relations of production and to have the ownership of the means of production socialised.
In the absence of that, universal basic income might be a way forward. Going back to the Five-Star Movement, it has some progressive ideas but it is also populist with anti-foreign rhetoric seeping into their agenda. So I’m not really sure how to describe them or how to relate to them.

You mentioned organisation of production as being key to employment. Considering that in the 1980s centres of production in Europe de-localised to peripheral countries, what can be done today to improve such organisation?
The first thing, at the European level, is to harmonise corporate tax rates. It doesn’t get rid of capitalism but it would increase control over those corporations, and the fact that this hasn’t happened yet just goes to show how powerful they are.
Another step towards a more progressive future would be to re-empower trade unions and that also depends on how trade unions themselves are able to respond more flexibly to the current situation. There are small ones here in the UK, such as United Voices of the World, which has managed to organise migrant cleaners in London in a very challenging, informal environment.
Then there are various examples, in Italy, Greece and France, where workers have taken over their factories. It would be ideal to see governments support such experiments with proper legislation.

Trade unions in Italy seem to be doomed as they represent people with long-term contracts, whereas the new workforce in the labour market only has short-term ones and, importantly, is far from that ideological culture of “let’s all push together towards the same goal.” What, then, could trade unions do to reinvent themselves?
Current success often comes from small trade unions such as USB or Cobas in Italy, and the challenge is to translate that success at the local level to the whole country. Trade unions at the national level remain very important. Unfortunately, many still think that as long as they are in discussions with the state and employers in tripartite institutions, they continue to exercise power, but they have forgotten that the creation of those institutions was the result of successful struggles in the past. So rather than discussing with employers and the state within these institutions, trade unions should first go back to their members, re-organise the rank and file through struggles, and only then re-engage with the state and employers.