Observing means modifying. So, it is impossible to know the truth for what objectively is. This principle inevitably is applicable on the artistic representation of the world and reality surrounding us. I paint, I represent or I photograph through my reality perception filter.
scritto da JOANN LOCKTOV 15 Maggio 2019 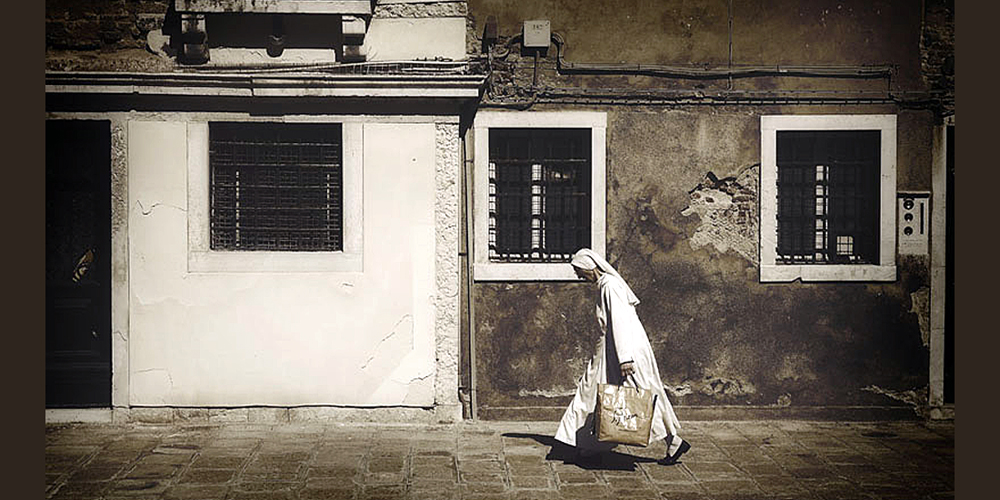 Your photograph in Dream of Venice in Black and White reflects a perspective that is often seen in your work: the truncated bottom half figure; swallowed by the pavement it is standing on. Can you tell us how this point of view originated and what it demonstrates?
I guess it depends on my general philosophical vision of existence. For me everything exists and does not exist at the same time. How we show if something is true or not, it is intrinsically linked to what we think is real, but our reality is always objective. Haisenberg said that in the moment we measure something, we modify it; this “modifying” could be applied at a psychological level at any moment we valuate something or someone, and to do that we necessarily use our perceptive filter. Observing means modifying. So, it is impossible to know the truth for what objectively is. This principle inevitably is applicable on the artistic representation of the world and reality surrounding us. I paint, I represent or I photograph through my reality perception filter.

On my case human figures are often cut or blurred or inclined (apparently against any physical law) because for me the physical aspect – meaning physics as science – is just one part, and maybe not the most important one, of the human being existence. Also, there is a big hidden part – sometimes hidden to the subject himself – that is not representable in one visual image, but it is real because we can see its consequences. Only the physical aspect would not be enough to explain what human beings do, or say, or feel and perceive (Nietzsche said that real reasons for what we do are hidden to ourselves too; if we would do things only on our perceptions we would note move a finger). It is just like dark-matter of the universe; we know it exists because we can see its consequences, but we know nothing about it…Well, I try to represent the dark-matter of our little human existences.

In photographing both people and architectural details, there is a fragmented quality that creates an abstraction, almost as if you dare the viewer to comprehend what they are seeing. In these images we need to finish the story that you’ve started. How do you determine the fragments that will inspire the deepest stories?
I try to see beyond the visible. I need to add that the frame is almost never planned. Most of the time is dictated by instinct. Sure, instinct is partly tamed by thought. You cannot erase years of study and reasoning; also, they are so deeply in me that I don’t need to express a conscious thought before taking a shot. When I’m in the process to take a picture, I don’t even know exactly what I am looking for, it is something I feel I have to do and doing it only in that precise way and only afterwards, when I look at the picture again, I understand the reason behind it.

In other words: there are some photographers who want to photograph something they think is interesting, they take more and more pictures of the same subject. And there are other photographers, like me, who are the typical “one shot man”; just one picture. It’s very rare for me to take more than one shot of a subject or moment. Because at my eye the story has to be told just like that, and if I don’t succeed, the initial instinctive sense is gone and reason took its place, and reason will pollute the image. So, it does not make any sense to take more pictures.

Along with photography, you’ve also studying filmmaking. Your live action short film, “Venice Otherwise” appears seeped in memory. What is the “truest dream” it represents?
It plays with the paradox of dream transcending reality but inevitably it is made with our memory material. So, at the end, the “truest” dream is that of our childhood. When we are children, our dreams only are not contaminated by cultural, social and economic factors as it happens when we are adults… In the film the two children project a story on a non-existent screen for us – the adults. The story is about an adult who is lost (a metaphor of an incomprehensible Venice map) or better who lost himself, his roots (symbolized by a crab) and he will find himself only in the memory of his childhood (the same ball the children were playing with at the beginning). Venice is the perfect background; a city dreamed and dreaming at the same time, made by past memory but in an alive present as well, and also the perfect city for children to live in.

You’ve lived in Venice for the last 8 years and now you’ve moved to the Philippines. The shift in your work has been dramatic. From almost exclusively black and white in Venice your images are now an explosion of color. Your portraits of children are especially riveting; fragments have given way to inquisitive beautiful faces. Can you explain what inspired these changes?
It is true, and that is obviously the reflection of an interior transformation. It does not make any sense to travel if you are not open to change.

It does not exist a precise “Me”, but just a gathering (a messy one) of thoughts, emotions, feelings, experiences which some how we transform in psychological aspects, casual ones – in which we recognize and identify ourselves, while we forget that at the end we are only an accidental result- we could become any other thing. We desperately grab ourselves on the idea that we have about ourselves and which prevents us to change, to learn, to feel new emotions and to see and measure the world and reality in a different way. This is one of the reasons why I try to forget myself, to let myself be influenced by what surrounds me, to comprehend the way of thinking and the perception of people around me. When I travel I try to do that. Inevitably, at the end, my way of taking images changes, too. What you see in my pictures of Philippines is an expression of what these people are giving to me.

You’ve cited the Buddhist story of Ejaku and Enen as the best reflection of your philosophy. Can you elaborate on how the story speaks to your artistic spirit?
I do not have a prejudicial consideration of myself or others. To be held as something or someone is just an illusion, as is any ethical or moral evaluation of our actions or the world’s. World is made by facts, facts happen and show themself in those other facts which are significant sentences. As language limits are the limits of the objective world, my language limits are the limits of my world, all that I can understand, think, or express.

Facts constitute the how of the world, not its essence. Not its value, nor its why. About the value, which means  “you have to be” it is never a fact and if it is a fact it stops to be a value, as in the world there is no objective value, and even if there would be one it would be worthless.

So, there cannot exist any ethical prepositions, ethics have no expression because there are no moral phenomena, but only moral interpretations of phenomena.

Nor we cannot talk about death; we cannot live death.

At the end, the only clever thing we can do it is to nurture ourselves with emotions and feelings (to stay conscious they give just illusions, nothing else) and to elaborate them with vital energy, like art.