“My camera is around my neck, but I don’t feel any obligation to take pictures; I use just my eyes, I mentally design possible frames. That’s the way I merge into the slow and serene flow of life, which is still possible in this tormented city.”
JOANN LOCKTOV 15 Giugno 2019 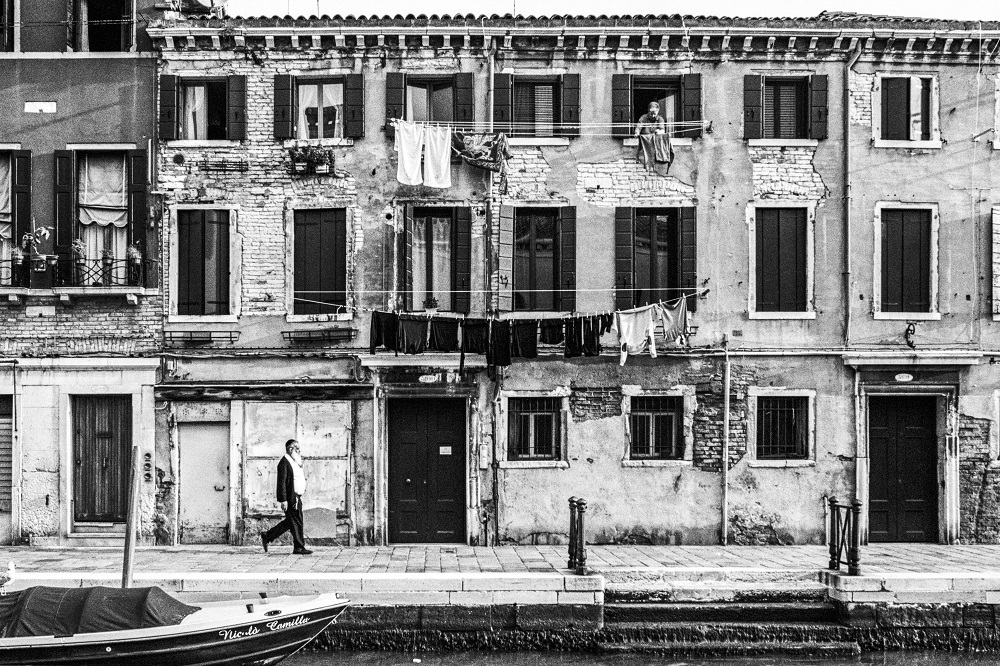 There is a gentle intimacy in your photographs, we see people engaged in daily life and yet there is nothing banal about the images. Perhaps it is the familiarity of the activities, which creates empathy. Any one who has ever held a young child’s hand has felt determination, apprehension, curiosity, and love in the warmth of their grip. All of this is conveyed in “A manina.” (“A little hand”). What are the ingredients that allow your photos to inspire compassion for both Venice and her residents?

In my photographs I try to use two ingredients: Humility and kindness.

Humility to dedicate myself with patience to a local news project: My photographs, even if painting different areas of historical Venice, focus on life of just a few sestieri, neighborhoods. Cannaregio is the first one.  Early morning, I like to leave my house in Fondamenta degli Ormesini and slowly walk to Misericordia, to broaden my path towards Fondamenta Contarini, walking back on my own steps to the Ghetto and the Tre Archi bridge. My camera is around my neck, but I don’t feel any obligation to take pictures; I use just my eyes, I mentally design possible frames. That’s the way I merge into the slow and serene flow of life, which is still possible in this tormented city.  I can see extraordinary local characters move on, who fatally tend to dissolve into the crowd as the day goes by. These are only traces, but they tell us that the city is still alive.

The kindness to gather pictures: I know a lot of angles in the city that are potentially photogenic, where a figure or its shadow, can become fleeting actors on a magical stage. And so I slowly loll from one stage to another. But, usually, nothing happens! Then, instinct suggests I wait and finally a profile stands out at the backlight. I take pictures respectfully, without letting anybody feel my presence too much. We exchange some words, a smile, a hand shake, a spritz together, perhaps. An approach more like a fisherman than an aggressive street photographer. A lean fishing, which has been source of satisfaction during the past years. By with this rhythm I’m afraid that at the end of my career I could count no more than a few dozen of shots in my basket.

Venice has often been described as a theatre set.  In “L’attesa” (“The waiting”) the seated gentleman is wearing a tricorn hat. His clothing, his intense focus on his book, the environs of the empty Campo San Polo; he could be waiting in the wings to go on stage. But he also exemplifies the passage of time, the layers of centuries that cannot be avoided in Venice. Can you tell us more about this photo, the circumstances and your choice of framing?

My attitude to Venetian photography is actually based on a preliminary preparation of sceneries. These are my sets, these are my stakeouts with precise visual angles, built in years, which are activated in some seasons only and only in some determined light occurrences. Some of them are still just potentials, because I could not make even one good picture, yet. But I never stop to hope for the right moment to arrive, or for that particular unaware actor to come and to be part of the play. The San Polo set has been very stingy to me for years. The right distribution between lines and spaces was really clear in my mind, but nothing ever happened. It was always too crowded, distributed in the wrong places. The goal was to achieve an almost deserted Campo with a few significant human traces. I wanted an image with an uncertain time placement. Could it ever be possible? It was just an incredible stroke of luck. It was when, coming from the Salizada, I entered the Campo almost running…the stage was animated! But of only one actor, who was appropriate and exactly in the center of the scene. He gave me the time to realize just one click, on film. This picture is once in lifetime, the man with the tricorn hat disappeared into nothingness. Maybe he has been drowned into time, I’ve never seen him again. The recent restoration of the Campo has modified the set; a few new benches have been added for the joy of those who like picnicking.

In your photographs there is a synergy between built Venice and Venetians. People are often perceived through windows, doors, and arches, which convey a sense of genius loci: inseparable environment and spirit.
How do you choose where to photograph in Venice?

Venetian architecture, as the monumental and popular one, is more of a passion for me, even more than photography itself. It is extraordinary how an agglomeration of millions of bricks can communicate to any visitor such an intimate feeling with nature. Obviously it is a sensation linked to the amphibious characteristics of the city, but it is not only that. Weather-beaten walls, arcades (sotoporteghi), byzantine arches and fragments, gothic small windows and old doors now bricked-up; all of them, one after the other in a casual and natural way, as they could be trees and ferns of an ancient forest. And it is just into the intimate twilight of such magic intrigue that I research the farthest and isolated angles to wait and take images, at the right distance, of the infrequent inhabitants. Sometimes figures, framed by architectonical elements, become the unconscious subject of unexpected altarpieces. I have a mental catalogue of dozens and dozens of these sceneries, but patience is a must and I need a lot of luck to catch the right moment! The private Venetian architecture of venetians would result in empty meaningfulness, so in my clicks there is always a trace of this precious presence.

With all the technical advancements of digital cameras you have chosen to shoot in film. What does film offer you that you wouldn’t be able to achieve with digital?

The choice to create photographs on film is substantially psychological. There are undoubtedly some quality differences in results, but nowadays with a digital camera practically anything can be simulated. Everything is linked to a mental approach. To me photography represents a stimulus to observe with a particular attention, to think, sometimes even to fantasize about what it surrounds me.  To take pictures means walking slowly, to stop, look up; capture people’s moves or even their non-moves. It is a reflective attitude with very low production, for which an old and strong film camera is enough.

I would not know what to do with a modern device ready to catch hundreds of images in a bunch of minutes. To me the classic 36 frame film is more than enough! It is not a vintage whim, I do not desire to possess and venerate a glorious Leica, I just need a reliable and simple tool with which to take pictures even with my eyes closed.  And I am not interested to check immediately on the screen the results of my “hunt.” It is truly more exciting to be anxiously waiting for the development.

This approach fatally led me to Venice, the city that most among the others is perfect for reflection, to build an unusual fantasy, sceneries. Slowly and patiently, year after year, images acquired logic, they became project, and they called other images. And every other new image helped understand more about past images.

Venice is heralded all over the world for her sumptuous palette of colors. Why have you always shot in black and white?

The choice of black and white is connected to the intention to give a simple and effective message. I think that the quantity of information given by color is exaggerated and confusing. Paradoxically the color image results are more distant to reality today, pushed by the advertising world to give incredible results, a chromatic perfection, which gets closer to vulgarity. Black and white on the contrary could be assimilated to radiography; thanks to its whites, which deplete and lays bare the reality of things. With its deep blacks it tells us the most secret and intimate situations. Another aspect is connected to my passion for Venetian architecture, for the delicacy of byzantine and gothic laces, which graphic sign is highlighted by black and white. With time I got used to “seeing” in black and white!

Pietro De Albertis (my personal site)
Imagoars Art Gallery  (the gallery where I’m usually showing my works).
Foto Medici  (the printer friend of mine showing in his web shop all my Venetians’ works).

Dream of Venice in Black and White
JoAnn Locktov