Inhabit the City Delicately: A Review of Dream of Venice in Black and White﻿

In a place where at any one time, half or more of its residents are transients, those who live in Venice all year round for their whole lives make it a real city.
ROBERT LANDON 18 Giugno 2019 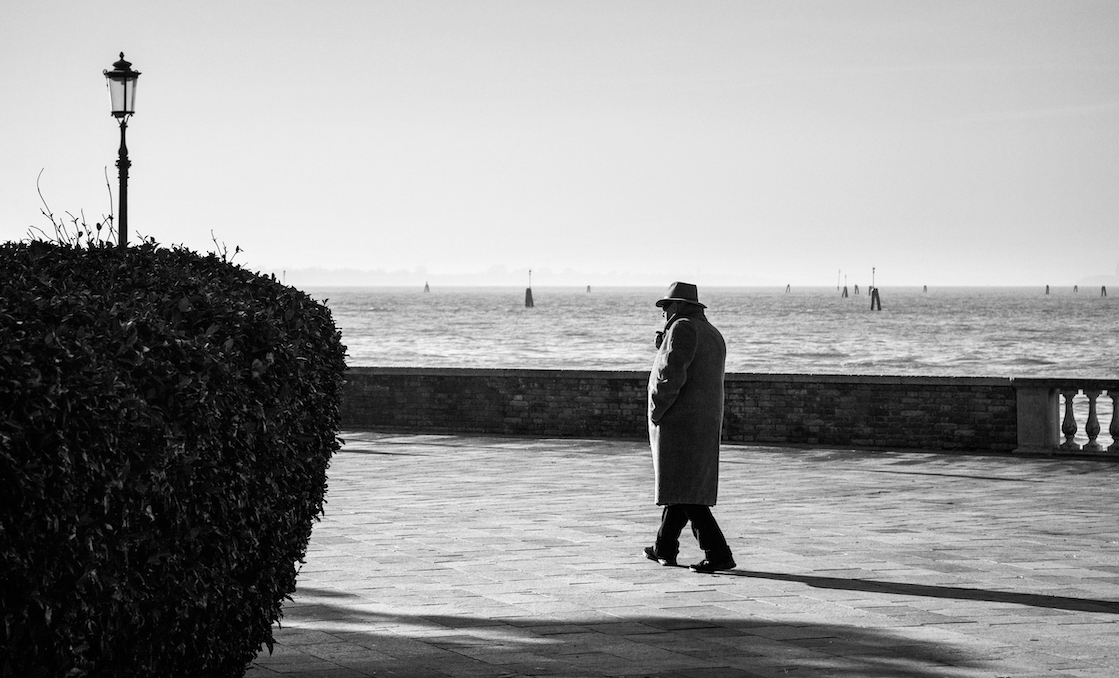 You may get married out of passion, but you stay for the conversation. Like too many others, I fell head over heels for Venice the first time I stepped out of Stazione Santa Lucia. For years, I came as often as I could, though always for frustratingly short times. However, that brevity kept my passion for the city’s physical beauty alive and fresh.

Then I got a kind of dream job—to write a guide to the city—and I came and stayed for many months. After a few weeks, even Piazza San Marco became commonplace—still gorgeous, but now my new normal. To keep love alive, I was forced to engage the humans who inhabited the city, and ended up starting a conversation that continues to this day.

No one else inhabits their city the way the Venetians do theirs. Despite serious threats to their way of life, there are still tens of thousands who keep the remnants of a once-great empire alive—and I am not talking about churches and palazzi. From its reverence for rowing to the Arab and Byzantine-Greek words that still pepper the Veneto dialect, daily life is still inflected by trade routes that paid for its greatness. And by dumb luck, the city’s exceedingly inconvenient built environment help preserve that culture in a way that modern Rome, Milan, and Florence do not. You are forced to live more slowly in Venice. You are forced into constant contact with neighbors since nearly every journey is by foot. Walking through the city is a real-time incarnation of the kinds of connection Facebook faintly mimics.

Unfortunately, that watery, medieval infrastructure is also an existential threat to Venetian culture. It is hard for 50,000 residents to inhabit a city when 30 million strangers flow into and out it every year.

Dream of Venice in Black and White, a book of photographs edited by JoAnn Locktov and with a lovely and sensitive introduction by Tiziano Scarpa, investigates this lived Venice. A noted expert on the city and founder of Bella Figura Publications, Locktov has chosen works by more than 50 photographers from 10 different countries. And yet she has managed to maintain a coherent, and very intimate, portrait of the city and its people.

Many of the photos seem to be snatched from a Neo-Realist movie, one made by a particularly brilliant cinematographer. None of them could have been taken anywhere else. Intriguingly, it is not always easy to tell which photos are contemporary, and which were taken by Venetian mid-20th century master Gianni Berengo Gardin. By juxtaposing works from different ages, Locktov makes us look twice, so we can know if we are peering into the present or into the past. Of course, that is a perfect metaphor (if that is the right word for it) for Venice itself, where funny things happen to time.

In his sensitive introduction, Venice-born writer Tiziano Scarpa, winner of the prestigious Strega literary prize, investigates the strange fabric of a life lived in Venice. He makes his home in a city where at any one time, half or more of its residents are transients — there for just a few days. The rise of online apartment rentals is accelerating this strange intermixing, as tourists move more and more into residential spaces. He accepts this as, to a degree, inevitable, but knows there is a cost.

Those who live in Venice all year round for their whole lives contribute to its gravitas, its problems, and the duties that come with it,

writes Scarpa. In other words, they make it a real city. There is no gravitas in Disneyland. And that is where things are headed more and more.

So what you do about it, he asks his non-Venetian reader?

Perhaps a paradoxical way of helping this city – writes Scarpa – would be not to come at all. Instead, stay at home and leaf through books of photos like this one, which inhabits the city delicately, making it bloom with a light caress.

I can’t promise I will stay away. In fact, I know I won’t. But I will do my best to “inhabit the city delicately”, and imagine that everyone who engages with Locktov’s beautiful book, both its photos and its prose, will be inspired to do the same.

Born and raised in Baltimore, Robert Landon majored in French and English literatures at Stanford University and earned an MA at University in English at the University of California-Irvine. He worked in Paris for two years, where he was the managing editor of a glossy, English language magazine about France. Returned to San Francisco, he wrote for Travelocity, eventually lucking into his first gig authoring guides for Lonely Planet. Then Rio de Janeiro and now New York City.