The cruise ships account for less than 10% of annual tourists to Venice but they claim 100% of our attention. Their presence is so deeply antithetical to everything Venice represents, that we have to wonder if the obliteration of Venice is not the by-product of poor governance but the actual goal.
JOANN LOCKTOV 16 Luglio 2019 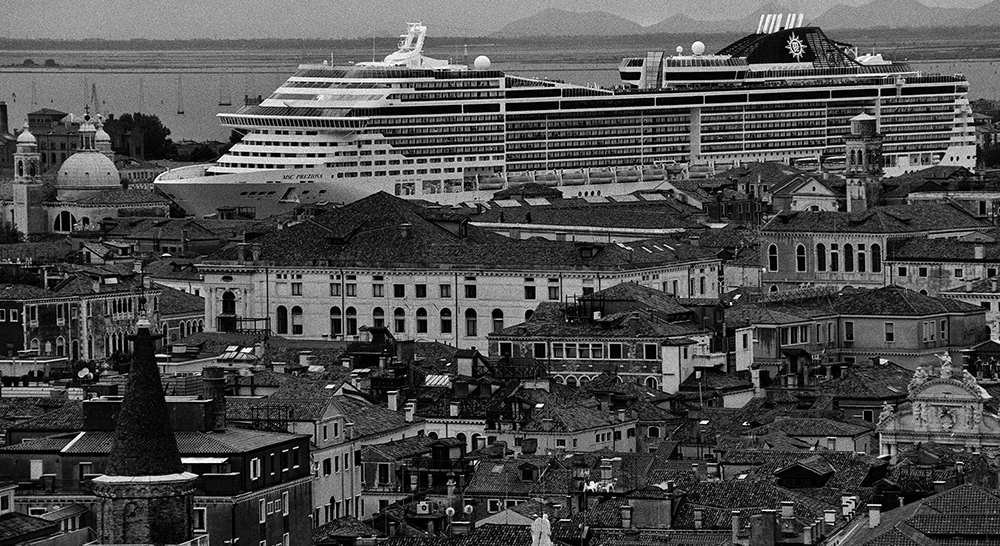 They said it couldn’t happen. The cruise ships were too big to fail. Escorted by tugs at the bow and stern, traveling at 6 knots, the ships were “safe” to traverse the San Marco basin and the Giudecca canal. And then it did happen, on June 2, when a cruise ship lost control and rammed into the quay. They said that a third tugboat would solve the problem; two at the bow and one at the stern. This extra tug would prevent any more mishaps. However this also was a fantasy. On July 7, a cruise ship took off in a storm with three tugboats guiding it, veered off course and narrowly missed the fondamenta in front of the Giardini.

The ships are not too big to fail, they are simply too big.  Along with severe air pollution damaging to people and monuments, noise pollution (a cruise ship never sleeps), and erosion of the lagoon mudflats and sediment loss––cruise ship vibrations and wave motion are abrasive to the ancient building foundations.  Even if the ships did not physically contaminate the fragile environment of Venice, there is the issue of monstrous visual pollution, which cannot be denied by any scientific, geological, or academic expert.

Photographer Gianni Berengo Gardin understands the visual pollution innately. This is why his 2015 exhibit, “Venezia e le Grandi Navi” struck an international nerve and became the catalyst for public out cry. Berengo Gardin allowed the world to bear witness to these catastrophic invaders. Venice’s mayor, Luigi Brugnaro understands it too, and that’s why he unsuccessfully tried to suppress the photographs.

The cruise ships have become emblematic of all that is wrong with Venice. The absurd continuation of their surreal presence in the heart of Venice is testament to the complete disregard the mayor has for Venice, her residents and also her tourists.

I am a foresta. I represent the tourist “type” Venice ostensibly wants to attract. There are millions of people just like me and we are observing the painful destruction of a city that we love. The cruise ships account for less than 10% of annual tourists to Venice but they claim 100% of our attention.  Their presence is so deeply antithetical to everything Venice represents, that we have to wonder if the obliteration of Venice is not the by-product of poor governance but the actual goal.

After the near-miss incident on July 7, Pino Musolino, President of the North Adriatic Sea Port Authority, tweeted that he would need to “…evaluate and solicit the adoption of other measures to guarantee full security to the city.” Mother nature is capricious. The climate crisis has taught us that we can no longer be dependent on historical weather patterns. Tug lines break. Decisions are made which prioritize profits over people.  If one professes to want to achieve “full security” for Venice there is only one solution. The cruise ships must be banned from the San Marco basin and the Giudecca canal.

How you can help to ban the cruise ships from Venice:

DONATE to Comitato NoGrandiNavi to support their vital work. They are on the front lines of this battle.

SIGN the petition to Danilo Toninelli, the Minister of Infrastructure and Transportation

LEARN the facts about the historical importance of the Lagoon and why cruise ships should be nowhere near Venice from Iris Loredana.

Venice is so beautiful, yet despite her age she attracts, tempts and teases men and women like no other, indeed her age makes her even more attractive more compelling more seductive, time has simply yet effectively enhanced every facet, every line, every tiny bit of detail enriched and gilded, to melt the heart of millions. Venice has through those years suffered, and her physical strength has and is being tested way beyond the imagination, she is a warrior, and she has defied the elements, defied time, defied the cruel ness of age, yet no matter what nature’s hand deals be it wind rain snow or the sea, Venice simply deals with it, and in style too.
Tourism, uncontrolled tourism on the other hand is fast becoming a cancer, eating away the the very fabric of Venice above water and below, the shear weight of human interest has and is taking its toll, non more so than by the giants of the sea, the cruise ships, monster ships that have over the years have grown to a Size that will do nothing other than cause serious damage to a city that sits in fragility upon the sea.
These monsters have no place, no right to be in such a fragile area that surrounds the streets of Venice, it’s eco system being poisoned and battered on an invisible epic scale that will in time undermine the very legs that Venice needs to support her, these gigantic floating shopping centres, entertainment centres, simply unload their human cargo onto the streets of Venice in nothing less than a vandalistic careless and destructive and irresponsible act of greed.

With no thought to the destructive impact such volume has upon the of infrastructure and the utilities and facilities of Venice.

Truly this is an act of total greed.

There are no logical reasons as to why these monsters of the sea should be allowed anywhere near this beautiful yet fragile floating city.

This type of tourist enters the city with very little to offer, contributing only to cause congestion, which over time will fatally erode the city that has tried so hard to survive time.

Do they spend? No not really, they come they go, they leave Venice poorer not richer for the invasion that hides under a cloak of falseness, vanity of footfall, no profit in this kind of tourism only loss, in every conceivable way.
And the danger now made clear recently with these big ships loose in such a close quarter to those who use the waterways every day to commute and to work, and to support the cities population meaningfully, big ships so close to the fragile structures beneath the waterline, and the dockside structures that form an access to the streets where business and daily lives could be mortally impacted upon, with one simple stroke of human navigational error.
The moment is getting closer, when one day one of those ships will inflict serious injury even death to individuals who should not have to worry that every day actions of life are being compromised by the irresponsible actions of a few, who care not what happens, hiding underneath a cover of “it will never happen” fabric, the likes of which makes up the suits of greed for those who say “as long as we can get it, let’s keep doing it”
And they will even when it’s too late, it’s a criminal act knowing that there is a danger, one that could result in a fatality, to allow that danger to exist, so now is the time to look at those who are in a position to stop this, to stop ! To make them stop! now! Before Venice and all who love Venice gets seriously hurt….