“That is something that I like from Venice: the city is not that big; hence, in the tranquility of the night, you can appreciate elements from nature, like the stars. That makes Venice a place with human dimension”.
JOANN LOCKTOV 14 Agosto 2019 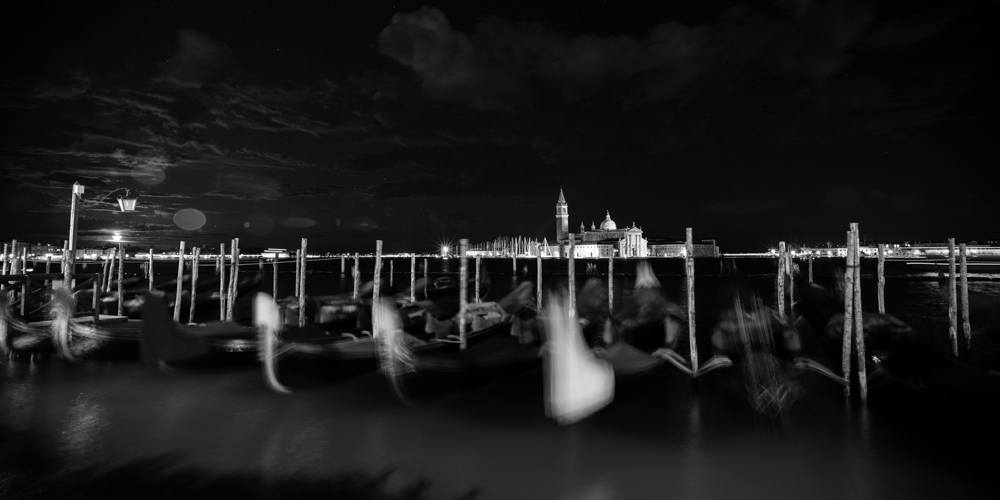 There is often majesty to your photographs of structures. This is a familiar scene however made unique with your choice to focus on San Giorgio Maggiore and have the bobbing gondolas subservient to the church.  Can you explain your decision for this hierarchy?
In reality, I was trying to get a picture of the full moon presiding over San Giorgio Maggiore and the gondolas, but when I was ready, the clouds blocked it. After a while, the clouds opened a bit, with the moon close to the horizon and that’s when I did the shoot. I wanted three elements: the church in the back, the gondolas in the foreground and above all the moon. Yes, the scene is very familiar, but the presence of the full moon made it different.

If you look closely, you might notice a few stars. That is something that I like from Venice: the city is not that big; hence, in the tranquility of the night, you can appreciate elements from nature, like the stars. That makes Venice a place with human dimension.

There can be sparseness in your work that echoes the minimalism of Bernd and Hilla Becher. Do you think about subtraction and reduction when you shoot or is it more important to achieve purity of line?
Generally, I try to aim for purity of line when I shoot, which requires some thinking about the composition and framing the scene, the right time for minimizing shadows, in some occasions the use of a tripod and a long exposure, or digitally removing unnecessary elements. This is the case for my pictures related to architecture.

But in other occasions, like street or action scenes, or taking pictures from a moving car, is difficult to get a purity of line: you get whatever you can, thus I aim for being able to subtract elements later. In the particular case of the aquatic bird, given the scarce light in the mangrove swamp and the speed of the bird, I opted just to highlight the silhouettes and washing out the sky, thus giving to the photo both a minimalist style and the sense of movement.

Your images of Venice are both in color and black and white. What elements do you consider when deciding on a monochrome palette for an image?
I admit that I don’t use a monochrome palette that much, but I have a slight preference for using a monochrome palette with images that have a strong contrast, like the lamp posts compared with the relative darkness of the street and the water of the Giudecca canal. I think it adds a little bit of drama.

There is a charming intimacy in this photo that was chosen for Dream of Venice in Black and White. We can sense the joy of the nuns.  Can you tell us the story behind this candid image?
As usual, I woke up early and I already had taken photos in the Rialto Bridge, the campo Santa Maria Formosa and then I went back to the sestiere San Polo. That morning was cloudy, so there were no shadows –something that I like- hence I continued walking around until late. In the Campo de San Silvestro, I wanted to take a photo of the houses opposing the church of San Silvestro, so I leaned on the small steps of the church.

While I was there, from the left a couple of nuns appeared, and from the right, a tabby cat. The presence of the nuns in Venice is a sharp contrast with the deluge of tourists. Then, one of the nuns started to whistle to the cat, and the cat reacted approaching the nuns.

If you look carefully, both nuns are looking to the cat, but the one in the foreground is whistling to the cat. I think this scene brings a sense of tranquility, delight and even a sense of community.

You’ve traveled extensively and to many unusual places like North Korea, Uzbekistan, Iran, Georgia, and Tajikistan. What do you look for when considering a location to photograph?
It depends on the country. In some places, the nature is fantastic, or the road is the destination, while in others I’m more interested in the cities. In some countries street photography is easy while in others locals are not quite happy with it. Generally I do a little research on what to look for in advance to the trip.

In the former Soviet Union countries, I look for the old soviet architecture, before it disappears: it could be massive buildings or just bus stops –some of these little structures are very creative and beautifully decorated. In other countries, like Uzbekistan and Iran, I found the ancient Islamic architecture impressive.

This photo is from Isfahan, Iran, which was one of the centers of the world at that time. Its main square is still one of the biggest and is very well ordered and clean. Locals gather there and they are very proud of its main square.