A Challenge to Brugnaro. A project, not a name

“Un’Altra Città Possibile” proposes a path forward in view of the upcoming election for the Mayor of Venice.
scritto da GIOVANNI LEONE 1 Febbraio 2020 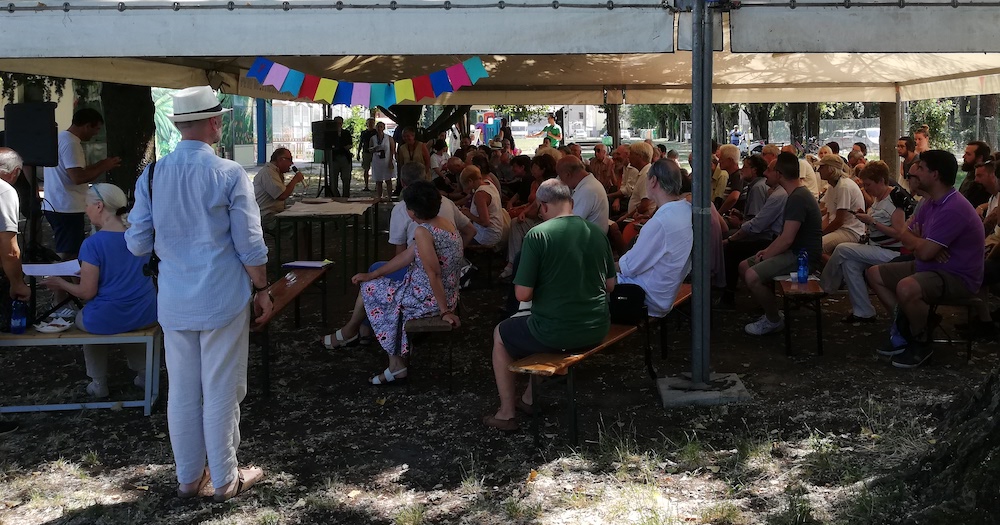 “Out with the names” is the request of both the right and the left. Not that we are going to love and agree with the right, but them not having yet expressed a single candidate seems to put the center-left in a condition of uncertainty. In truth there is no stalemate and the debate proceeds, without acceleration or sprints. A name, not a project, is what Venetian electoral anxiety seems to come down to. The game of naming the candidate does not interest Un’Altra Città Possibile (UACP), which continues to emphasize method.

For this we have prepared another game which seems like it comes from Settimana Enigmistica: an exercise with questions and a short list of answers that everyone can use to arrive at their ideal profile of a Mayor, the characteristics and prerequisites that they believe the candidate must possess. The result is not binding, but rather a metric for measuring the proximity and distance of the proposed candidates from the desires of the citizens. The need to restore the pallino to the citizens, to bring the many, the too many who abstain from voting back to the ballot box, is confirmed by the elections in Emilia-Romagna, which show encouraging percentages of voter participation.

UACP is said to have the naiveté of a neophyte, obscuring the fact that our methodological proposal imposes new systems of measurement for the progress of works, and the stage name is not among them. The adoption of modalities able to guarantee participation in decision-making processes is slowing, but can at the same time confer greater solidity and cohesion in the long term. Pros and cons are always contiguous; just as speed can be either timeliness or haste, so slowness can either cause delay or provide the time to consolidate cooperation and coordination.

The PD has invited different political subjects to the debate in order to evaluate the forms of a possible collaboration, and everyone hopes for the opening of a new political era. These tables rotate around names and programs but the real point of departure in general is the choice of a candidate, and for this reason the failure to identify the competitor(s) to Brugnaro is considered by many to be critical, as this is to the outgoing Mayor’s advantage.

The shorter time grows the more one looks for a name that has the mark of a public figure or prominent personality, forgetting that between the person-image and that of the road there is room for a return to the centrality of politics as a space for relationships, debate and convergence, not only a place for traffic in illusions, promises, dreams, and commitments that are impossible to maintain. We bring dignity back to politics without bending it to logic that is merely publicity to gain consensus, and we don’t reduce it to a mere commercial transaction.

Having just one man in command is a method that does not work, on the right as on the left. The beacon of “celebrity” takes energy away from politics, feeding disenchantment and discouraging the participation of the citizens, who are held at a safe distance from the decision-making processes entrusted to the strong-man in charge. Only a truly participatory political path can bring the change in the political climate which we so badly need.

We need to retake the helm of a politics that has been left to drift, in order to take a credible route. The disaffection towards specialists of all types who continue being called on (politicians, intellectuals, businessmen, academics, men from theater or television…) has brought about – as a reaction – the promotion of any person to whom the citizen feels closer than political professionals.

Between these two extremes there is space for a third way, that of the qualified citizen with a specific personal, professional and political profile. It is to this that we are dedicated, to the definition of that profile, because UACP is committed to building an ambitious long-term political project, without chasing propaganda. Many innovative points have emerged in UACP, which we are trying to implement, such as concentrating on method and on the contents to be addressed rather than on the person, together with programs focused on the common good and public interest. We invite everyone to participate in the assembly on Saturday 1 February, where we will discuss the road taken so far, the profile of the Mayor, forms of participation (for the elections and after), the organizational structure we are setting up for ourselves, and an open survey for indications of possible candidates for Mayor and for the list.

Leone by name and architect in fact, lover of beauty and goodness, Giovanni Leone is dedicated to composing, designing and creating between the spoon and the city, merging the idea of matter and word. This delight brings him closer to the world of food and wine, where he feeds on the partnership with masters such as Gino Veronelli, Gualtiero Marchesi, Giacomo Tachis who teach him the rigor of freedom. In the center, he prefers the periphery, the realm of emptiness and a blank page ready to welcome new writing