Can history help build a future at Rialto?

With its proposal to use the empty space at the Pescheria – which is owned by the City and slated to become a museum – to host activities, exhibits and commerce based on Rialto’s history as the heart of Venice and a center of global commerce, Progetto Rialto joins other European cities in looking for ways to revitalize stressed but important historical markets in the age of overtourism.
scritto da PAUL ROSENBERG 6 Febbraio 2020 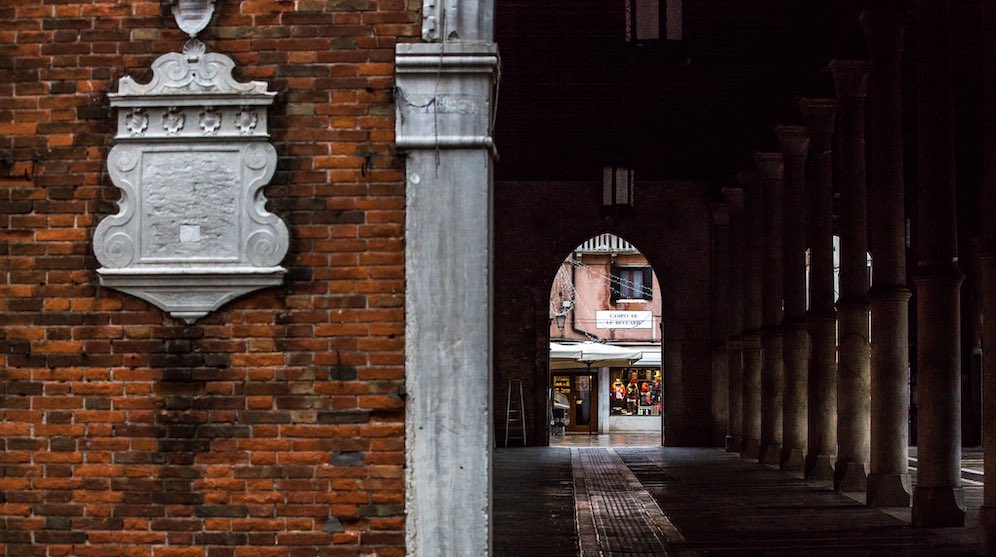 It’s Thursday, January 30 at 5 PM, and at the Accademia Gallery in Venice there are at least 50 people who had hoped to get in, standing outside a hall that is already filled to capacity. Within the hall are seated another 150 people who have come to hear a lecture about the history of Rialto entitled “The richest part of the world: the insula realtina in the modern age”. Delivering this talk, about a place she has called “the center of a global economy” is Donatella Calabi, renowned Urban Historian and historian of Venice. Calabi is something of an international phenomenon herself, having not only worked in Venice at IUAV for 30 years, but also in Paris, London, Boston, Madrid, Sâo Paulo and Tokyo.

This talk is the first date in a lecture series that runs through May (the calendar of events is below), which is being presented as part of a broader initiative by the new Progetto Rialto Association. This organization, spearheaded by Calabi, aims to use the tools of history and academia to help revitalize the Rialto Market.

The thousand year old Rialto Market is caught in the vicious cycle of overtourism and the tourist economy monoculture that is transforming the city of Venice. Moreover, a shrinking population of citizens and the proliferation of chain grocery stores in the city are decimating the fish and the fruit and vegetable markets at Rialto. Both are in serious decline, and the few remaining vendors are finding it harder and harder to survive.

It is this decline that inspired Calabi to act:

I consider this effort to be a kind of ‘civic duty’. All my life I have worked on the history of cities as an “academic”, and the market spaces and buildings, as well as the merchants’ life together, with their need to get in touch with different national, ethnic and regional communities, have been one of my research subjects. Now, I see the Venetian market dying before my eyes. It seems to me that we have to react against the indifference to the transformation of the city’s life. Little by little the city, losing residents and activities for everyday life, is turning into a tourist “park.”

Rialto, however, was once the dynamic heart of an international city and the hub of a global economy. Progetto Rialto proposes to bring Rialto’s historical and cultural richness to the public by creating not only an exhibition space but also a cultural/research center that can host a variety of events, and in doing so, make Rialto’s history itself an attraction to the area. Most visitors may not know about the incredibly wide variety of international trade and banking that went on there, not to mention the numerous woodworkers, luthiers, jewelers and many other crafts that were located nearby, or the monthly auction of pawns from the Jewish banks, or virtually any announcement of any importance to the city – all of this and more happened at Rialto.

It is exactly this complexity that historians are perfectly equipped to illustrate.

As historians, we (my colleagues and I) decided to use our tools (archival research, knowledge of written documents and drawings, and narration) to provide visitors and citizens a deeper knowledge and understanding of the complexity and richness of Venice as an important commercial and cosmopolitan city in the early modern period. Our idea is that providing information about this complexity of activities and exchanges all over the world, which are rather unknown if one is not among the ‘experts’, and which are certainly not well displayed in the existing Venetian museums, could suggest the development of new relationships, but can also be a point of reference and encounter for students of various disciplines and young people interested in or working in related fields.

Specifically, Progetto Rialto proposes using the Pescheria building (which is owned by the City and is designated in the town plan as a “museum”) as place to attract a mixture of overlapping commercial, artisan and cultural activities

aimed primarily at the citizens, but also at tourists who want to better understand the history of the city, emphasizing the role Venice has played in global trade for centuries (as a true “global economic center”)

Rialto was the scene of an extraordinary range of activity, and this project aims to build its activities around that history, proposing the creation of

a Museum that tells the history not only of the ancient Rialto, but also and above all of Venetian commerce and industry (merchants, entrepreneurs, ships, trade routes, institutions), the heart of which was at Rialto: the organization of the very rich food and spice market, the fish market, the traditional craft shops, alongside which could be found international financial exchanges (the banks), the ‘treasure’ of the State and the administration of Justice. Put simply, Rialto was the true heart of the city.

The location at the Pescheria would allow the addition of concessions to the historic but impoverished fresh fish market, such as the preparation and sale of traditionally cooked food,

together with a kind of research “laboratory” on Venice and its international commerce, trade and world relations. The first floor of the same building (about 900 square meters) could be used for temporary exhibitions, meetings, presentation of books, summer or winter schools (to be prepared together with the owner of the building – MUVE, the Municipal Museums Foundation – but also with sponsoring universities)”. The hope of course is that this project can help “combat the deterioration of a particularly important area of the city, in which the changes of use that are underway risk transforming the area into a large, bad quality supermarket.

The Pescheria however, could be just the beginning for Progetto Rialto; they also have their sights set on a much bigger architectural prize:

we know that the Fabbriche Nuove by Jacopo Sansovino (now the Tribunal), an extraordinary XVI century “Monument” along the Grand Canal (which is owned by the State) will be empty in two or three years, when the civil justice offices are moved to Piazzale Roma. It is a great challenge: can this building become a possible point of reference and place with activities for the citizens, or will it become another luxury hotel?

This kind of revitalization concept is not unique to Venice and Progetto Rialto. In fact, it is being tried in various ways all over Europe, with some signs of success:

Progetto Rialto enjoys the support and contributions of many individuals and institutions, starting with an important collaboration that was established a couple of years ago with Comitato Rialto Novo (led by Gabriella Giaretta), an organization which works in and on the market area, and collected 5.000 signatures for this project. Further, Progetto Rialto is guided by a Scientific Committee of international scholars (including Marta Ajmar, Maurice Aymard, Philippe Braunstein, Deborah Howard, Lorenzo Lazzarini, Paolo Morachiello, Reinhold Mueller, Luciano Pezzolo, Elena Svalduz, and Gian Maria Varanini). Of particular importance is the contribution of Luca Molà, a Venetian professor of Early Modern History at Warwick University, who has studied XIV-XV century industries and silk production, as well as the import and export of luxury goods. Progetto Rialto has also partnered with a variety of prestigious Venetian institutions: Università Iuav di Venezia and Università Ca’ Foscari di Venezia, Dipartimento Beni Culturali dell’Università di Padova, Accademia di Belle Arti, Ateneo Veneto, Istituto Veneto di Scienze, Lettere ed Arti, Fondazione Cini, Associazione degli Artigiani and CNA, all of whom have expressed their availability and willingness to collaborate on cultural and/or educational initiatives. An agreement is also in process with the Archivio di Stato for the development of cultural activities.

Now much depends on the slow processes of raising membership and money, and presenting the proposals to the City (which will happen at a meeting on Feb. 5). In an election year the City government may be more inclined than usual to making a gesture like approving the Pescheria project. In the meantime, though, Donatella Calabi and Progetto Rialto are not waiting to get started. Instead they have organized an impressive lecture series in collaboration with the Accademia Gallery, which has provided the project with a temporary home – where last Thursday’s inaugural lecture was ‘sold out’. Once again reflecting the international character of the series and the organizers, the “Lessons of History” lecture series will feature speakers from Italy, England, France, Germany and Croatia offering expert reflections on the history of Venice, and its beating heart along the high banks at Rialto.

Lectures are Thursdays at 17:00 at the Accademia Gallery in Venice, and admission is free. Oh, and don’t worry about getting a seat – the Gallery is moving the series to a bigger room.
“The Lessons of History” Lecture Series: Calendar of Events, January – May 2020

Thursday January 30
Donatella Calabi (IUAV) The richest part of the world: the insula realtina in the modern age

Ever more tourism in Venice and in the Veneto. A perverse interaction

The answer to your question is, yes it can. However, sadly, with Vela renting out the space to whomever they please I doubt there is much of a future for any Venetian cultural group to have a lasting influence.