“It’s time America takes its knife out of our side and allow us to just live and prosper as any of our White American counterparts and we thank those non-black people who have always stood with us and who continue alongside us in the fight for our posterity”.
scritto da CLARISSA GAYTON 6 Giugno 2020 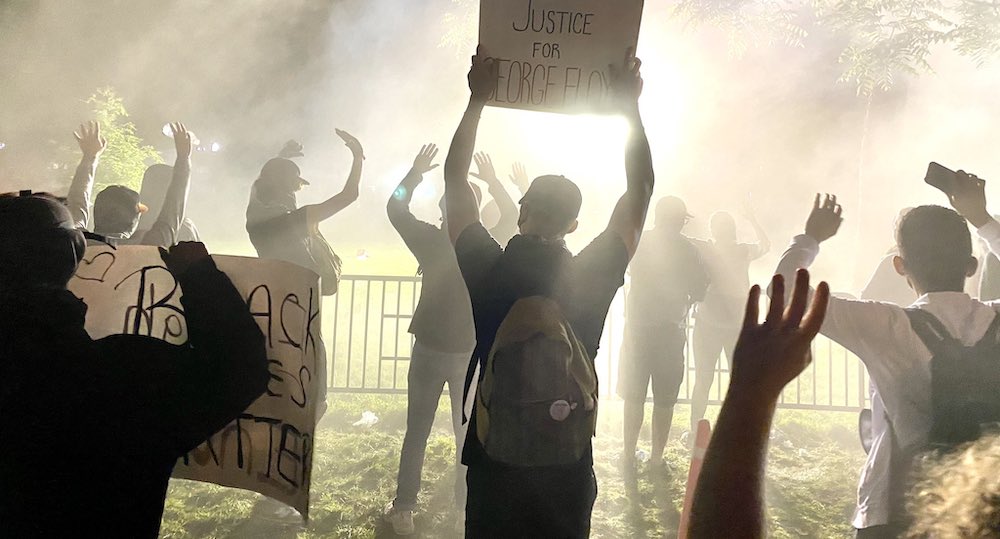 Just the other day, a non-black friend of mine asked me how I was doing. It took a few seconds of silently staring at my phone, thinking about how best to express myself so as not to offend or come across in the wrong way. I wanted to tell her that I am angry at white privilege, I am hurt, I am appalled at White Americans’ audacity, I am heartbroken like never before, I am sick and tired, sick and tired of being sick and tired. I am overwhelmed with grief and heartache at the mistreatment and senseless killing of my people, for no other reason than the color of our skin. Let’s talk about this. But I didn’t say any of this, I simply said I am sad. No matter which way you look at it, there’s no rational sense to it. At the end of a conversation about race in America with someone who isn’t Black American, I often feel a sense of betrayal at their lack of understanding, so I’ve learned not to engage fully with them on the subject. I think George Floyd’s death woke people up. We are tired of White Americans refusing to understand, choosing not to acknowledge their privilege and subsequent oppression on an entire race of people. We are not immigrants in America. We are not Africans in America, though we are certainly of African origin. We are Americans in America, asking for justice, equality, respect and simple human decency. It’s not really difficult to understand. The labeling of every Black American killed unjustly as a criminal is equivalent to an abuser blaming the abused. It’s classic victim shaming used only to mask their feeling of shame. I refuse to think that people can really be that willfully ignorant so I tell myself they do it as a way to deal with their overwhelming emotions. For too long, an entire race of people have been systematically oppressed and silenced. Oppressed in education, oppressed in opportunity, oppressed in the workforce, oppressed in entertainment, and so on. We are told to just be happy with what we’ve been given.

In times like these, lyrics from Sugarland’s Happy Ending spring to mind:

It’s a song that always brings tears to my eyes because of how amazing a simple four-line lyric can expose the raw truth and systemic racism of life in America for Blacks. The notion of equality is a façade in, arguably, one of the greatest nations in the world. George Floyd’s death has opened up wounds in every American citizen, on both sides, and has reached globally to bring together people from all over the world. During the height of a pandemic, Floyd was murdered by none other than a cop. A cop whose code of conduct goes a little something like this:

As a Minnesota Law Enforcement Officer, my fundamental duty is to serve mankind; to safeguard lives and property; to protect the innocent against deception, the weak against oppression or intimidation, and the peaceful against violence or disorder; and to respect the Constitutional rights of all to liberty, equality and justice.

That police officer and the others who watched on violated every line of this oath. The divide between white and black in America is deeply rooted in our history. The silence between us rife with anger, shame, judgement, and denial. Black Americans have been unjustly treated for generations and we have had enough. White Americans don’t want to talk about our history in relation to race. They don’t want to feel the shame of their ancestors so they say things like “all lives matter” or “he/she was probably a criminal anyway”.

This is not how we fix the problem. The only way to fix the issue at hand is to first acknowledge the injustice that Blacks experience on a daily basis. I’ve had a friend recently mask her support for Black protestors in America by sharing her experiences as an Asian person having travelled all over the world. Lest we forget about the other minorities, it’s important to remember that this is a case of white against black and it goes back more than 400 years. All we ask of those who stand with us is to acknowledge the situation at hand and stand together to address it and fight for equality.

Trying to shine the light on other issues that are in no way relevant, though just as important in their own right, to the fight for equality by Black Americans takes the significance away from the deaths of George Floyd, Breonna Taylor and Ahmaud Arbery and what we are fighting for. So stand with us, fight with us, but do not change the plot. Every American citizen deserves equal treatment under the Constitution and it’s time Black Americans were given their fair due. It’s time that those so desensitized to the plight of the few, stand up to protect our American Union and the very American ideals of freedom, liberty, and justice for all.

Black Americans and White Americans of all socio-economic status are speaking out, joining forces to protect our great nation. Musicians of all genres are speaking out. Corporations and the entertainment industry is speaking out. Just a year ago, this would not have been the case. So, though my heart is heavy from years of oppression, from the feeling of always fighting an invisible uphill battle in my 30 years on this Earth, I feel a spark of hope for the future. One man can change the world and I challenge every non-black person to educate themselves and become more aware of their behavior towards the Black race all over the world. Think twice before you follow someone around in a store, before you clutch your purse a little tighter, before you base your assumptions solely due to someone’s skin color, before you judge the music they enjoy or the books they read, before you comment on the smallness of their nose or the brilliance of their brain in relation to the color of their skin. We, Black people, feel just as any other human and what we feel daily amounts to hurt, anger, disgust, and often shame. We mask that hurt and shame with pride and then we are told we are racist for being proud to be black. It’s time America takes its knife out of our side and allow us to just live and prosper as any of our White American counterparts and we thank those non-black people who have always stood with us and who continue alongside us in the fight for our posterity.

Rational in the most annoying sense, detail-obsessed, and part-time anarchist, Clarissa enjoys long walks on the beach in Lido. A graduate of Trinity College Dublin and Hampton University, an HBCU, she is a Black American living in Venice, Italy with her Venetian husband.

Brava, Clarissa! Very well written and I am incredibly proud of you.

Brava, Clarissa! Very well written. I am incredibly proud of you!