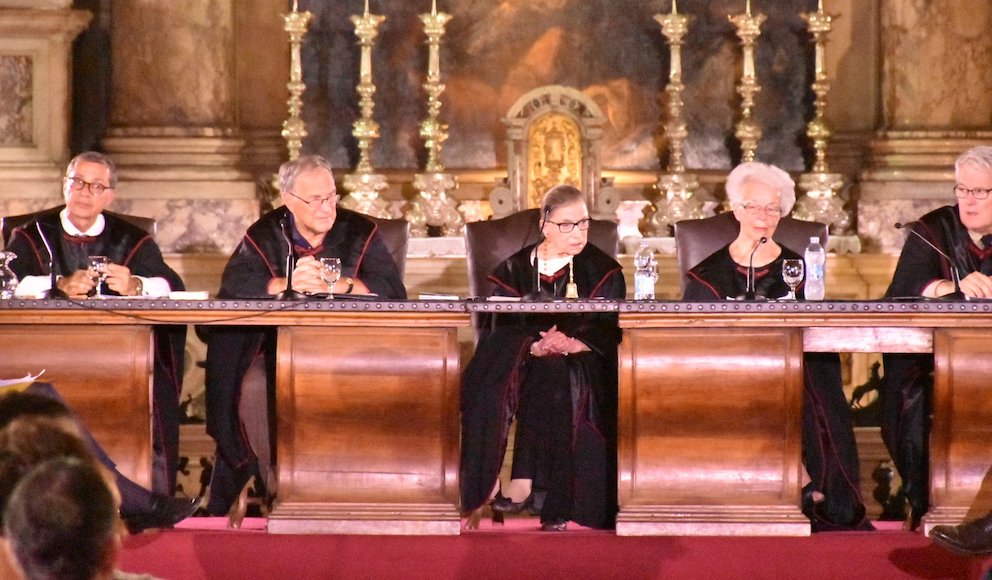 It was a searing hot afternoon in July 2016. In the Scuola di San Rocco more than five hundred people, seated in the presence of Tintoretto’s masterpieces, reeled under the powerful lights that accompanied the RAI cameras, raising the already high temperature. The hall vibrated with excitement and the desperate flapping of fans. Students, scholars, civic and religious leaders, donors, ambassadors, personalities, Venice socialites – a widely varied public had gathered for an evening organized by Ca’ Foscari University and linked to the extraordinary powers of metamorphosis of an author that lived four centuries earlier: William Shakespeare. The anniversary of his death intersected with the 500th anniversary of the founding of the Ghetto of Venice, and the idea was born to stage in precisely that Venetian campo – which has become a global metaphor for segregation – the work by Shakespeare ideally suited to the place: The Merchant of Venice. He had never been in Venice but certainly had read a medieval tale that speaks of an anonymous Jewish moneylender of Mestre, and from that he forged Shylock, a character destined to make a mark on the history of civilization. Why, then, did he move this character from the mainland to Venice? Because since the time of the original story la Serenissima had confined the Jews in the Ghetto, including and excluding them in one stroke (a condition that would have been unthinkable in England, which had expelled the Jews in the 13th century).

This comedy, with its tragic overtones, culminates in a trial before the Duke in which Shylock demands a pound of flesh from the Christian merchant Antonio for a forfeited loan (and because of the anger caused by a series of iniquities he had endured, the most recent of which was the elopment of his daughter Jessica with a Christian lover and a considerable treasure).  While we worked on this first historic staging, made possible by a European project won by Ca’ Foscari, Judith Martin, an American writer and a great lover of Venice (to which she dedicated her elegant book No Vulgar Hotel), proposed involving Ruth Bader Ginsburg in a Moot Court. The American Supreme Court Justice had just participated in various ‘mock trials’ in Washington, with real judges and attorneys called to publically debate celebrated causes that involved Shakespearian characters. I knew Ruth Bader Ginsburg by reputation, but I had not fully understood the legendary status she had acquired over time, becoming an icon even for the youngest, who chanted her initials, RBG, like she was a rock star. In hindsight I can say that it was thanks to her charisma that not only the trial was possible, but the theatrical staging by the Colombari Company itself, generously supported by American donors who revered this minute and formidable woman.

And so in that tropical San Rocco everyone seemed to succumb, but she, under a heavy black robe bordered in red, carried on as if nothing was wrong, alongside her friend, attorney Fabio Moretti, Laura Picchio Forlati and the other judges who shared that Renaissance court show with her. Here Shylock, Antonio and Portia, each defended by their own lawyer, would see their cases heard again 420 years after the original verdict, in which Shylock loses the case and is forced to convert to Christianity. The arguments would be preceded by a reading from the drama by the great actor F. Murray Abraham (“Hath not a Jew eyes…”) and a presentation by two eminent American Shakespeare scholars, Stephen Greenblatt and James Shapiro. It was the last of Obama’s eight years in the White House: would the two colleague-rivals have ever suspected that in the not too distant future they each would have written a book about Trump’s America in light of Shakespeare?

At the time I had the good fortune to accompany RBG around Venice, to visit the Ghetto, to Wake Forest University, where she lectured, and other places, under the attentive and affectionate gaze of the gentle giant who was her bodyguard. There were precious moments seeing the tireless curiosity and total availability of a woman who embodied two great engines of social and cultural progress in the 20th and 21st centuries. RBG was born in a time and place in which women and Jews were second class citizens. The ability to transform this minority condition into an ethical impetus, inspiration for justice and a desire for change is concentrated in her. Her legal victories on behalf of women and her cultural influence have gone well beyond the confines of the United States, and the roaring, endless applause that greeted her entrance among the stands built in the Ghetto for the Merchant audience (where her grandson played the part of Lorenzo) emphasized her greatness.

The trial at San Rocco became an opportunity for everyone to see at work her sharp intelligence, her clear and rigorous mind, and her love for textual interpretation (fed, by her own admission, by her college literature professor, Vladimir Nabokov). The seriousness and professionalism with which the events from a fictional work were transformed into a solid and modern legal subject were both a demonstration of Shakespeare’s extraordinary ability to remain fresh, and the extraordinary ability of RBG, a great lover of theater and opera, to handle an incandescent subject. For centuries Shylock has been the incarnation of the two most entrenched stereotypes associated with Jews: attachment to money and the propensity for revenge instead of forgiveness – prejudices, it should be said, often found in the most cultured people, and which are anything but extinct. If Shakespeare had already managed to complicate things, portraying Christians and Jews as equally tangled in passions and impulses in which business and affections mixed and blurred, Justice Ginsburg demonstrated how justice must be equitable to guarantee that people can live together whatever their identities.

That on this commemorative occasion the court restored to Shylock his proverbial 3000 ducats and revoked his forced conversion to Christianity was to some extent a foregone conclusion, full of great symbolic value being pronounced under Tintoretto’s marvelous paintings, in which figures from the Old Testament are all represented as prefiguring the New Testament, and as supplanted by it. But another part of the verdict was more controversial. Portia, who in the original drama disguises herself as a judge and develops the legal strategy that saves Antonio and condemns Shylock, was accused of fraud for that masquerade, and was sentenced to joining the law faculty of the University of Padova. For some this verdict, accompanied by the roaring laughter of the audience, could be interpreted as an act of hostility by a woman against another woman, as if while throwing antisemitism out of the front door, misogyny was allowed to sneak in the back. in the window. My interpretation is different. In the Ghetto at the time of Shakespeare, Sara Copio Sullam, a young Jewish woman who hosted an academy where poetry and philosophy were discussed by both Jewish and Christian interlocutors, was prevented from following her intellectual path. For RBG, reaching the Supreme Court was a very difficult climb that began from her youth, at a time when a woman who simply already had children was denied job opportunities readily available to a man. Shakespeare’s Portia is a woman who, for her part, must struggle with the conventions of her time, and who certainly had no options other than disguise if she wanted to save Antonio. But that strategy remains a shortcut, and most of all, as RBG herself confirmed when commenting on the verdict, “Portia is an enigma. After waxing eloquent about the quality of mercy, she shows no mercy at all for Shylock.”. Portia temporarily escapes her condition as a minority, but in doing so reinforces prejudices against a different minority.

On the contrary, RBG was a fierce champion of all minorities, and her passing leaves a great void. But her legal and cultural, ethical and political legacy is destined to endure. In the Jewish tradition, which RBG saw as in full harmony with with her secular service to the rule of law, one who dies on the eve of Rosh Hashanah (the Jewish new year) is a “tzadik” – a “righteous person”. This was the fate of a woman who survived and fought recurring illnesses, and passed away just as the year 5781 arrived. “May her memory be a blessing” is the ritual phrase that accompanies the dead; but someone has already paraphrased it, writing “may her memory be a revolution”.