Venice tech developer SerenDPT aims to provide an alternative to Venice’s unsustainable economic dependence on tourism, thrown into crisis by Covid, by creating a high-tech economy – made in Venice, by Venetians – that can be a sustainable alternative and model for the city and beyond.
PAUL ROSENBERG 29 Ottobre 2020 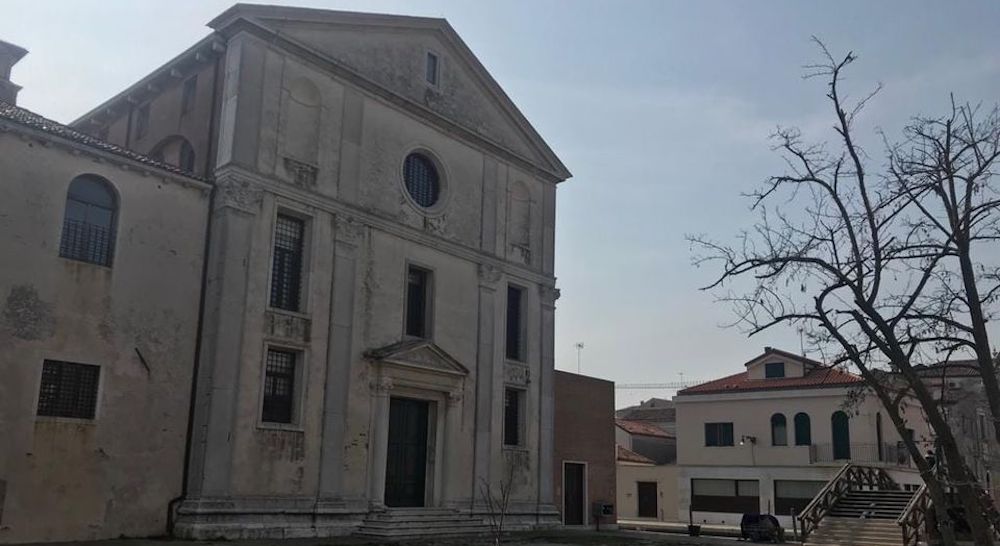 Take the #2 vaporetto from Redentore across the Giudecca canal to the island of Giudecca, and you are let out on the Fondamenta Rio Sant’Eufemia. Walk to the right and you soon encounter, just like anywhere else in Venice, a rio crossing your path. Here the Fondamenta turns left, and as you follow the water that is to your right, the line of buildings on your left opens up to a grassy campo – Campo San Cosmo – filled with ducks and fishing gear (at least it was the day I was there). Looming directly ahead is the Chiesa dei Santi Cosma e Damiano, a 15th century building whose mute white façade, with empty recesses for statuary removed long ago, belies its status as a deconsecrated church. The building, which was used as a factory for a century (1887-1987; there is still hardware mounted to the interior walls from those times), now belongs to the city, which has leased it to the object of our inquiry, SerenDPT, the technology startup now in residence there.

Traces of the building’s pre-industrial beauty remain on the interior walls, in the form of fragmented frescoes high above what was once the altar space. However, it is not the past that brings us to this church, but rather what is happening inside this ancient space at present. In typical Venetian fashion, within these ancient walls something thoroughly modern has been built. Behind what once was the altar in the space where the congregation would have been seated, you find yourself faced with a multi-story office space of steel and glass. As you head up the stairs and down the corridor you sense technology and innovation, work wholly dedicated to the future taking place within this historic space.

The church, now known as H3, is home to SerenDPT (Serenissima Development and Preservation through Technology), a high tech development company led by Dr. Fabio Carrera. The company’s goal is to bring high skill and high technology jobs to Venice by developing Made in Venice technology products aimed at providing data driven solutions for some of the city’s problems. Once mature and deployed, those products can then be marketed internationally. SerenDPT shares the office and is connected with inclination for risk taking and direct action. For example, at the age of 15, having already learned English during a stay in England, Carrera went to the US to play basketball at a camp in Massachusetts. This led to an invitation to stay and play high school basketball in Chicopee, Mass. While that may not have lead to a career in pro basketball, it did allow Carrera to a) skip the draft in Italy, b) graduate from high school in the American 4 years instead of the Italian 5 years, and c) immediately apply to Worcester Polytechnic Institute (WPI), where he was accepted and went on to get a degree in EE. After getting his Masters’ Degree, he graduated in 1984. Shortly afterward he went back to Venice due to an illness in the family.

While back in Venice, Carrera married, and his son was born in 1990. He then decided he wanted to pursue a PhD, but was not sure where to apply. It was around this time that Carrera attended a First Night organizers’ conference in Tacoma – he was there on his own, with the idea of starting a First Night event in Venice – where he happened to meet someone from MIT, who after hearing his ideas encouraged him to apply to their doctoral program. Carrera was accepted to MIT, and while in the PhD program he worked on an idea he called City Knowledge – this idea would lead to the concept of Smart Cities. The idea was sufficiently ahead of its time that when it came time to present his thesis MIT was unable to find anyone qualified to judge it. So, Carrera – who was also working full time – started over, and after a seven year, two thesis run, received his PhD.

Despite the fact that his work and education had him in the US for a good deal of time, Carrera says,

I never felt like I left Venice. I always ended up coming back for 3 or 4 months each year.

In the end there was never really a question of where Carrera would make his base. Even before his PhD was complete he had proposed to WPI the idea of opening a project Center in Italy. The result was the Venice Project Center and the offices here at H3.

VPC has been conducting research projects and collecting data in Venice for 30 years, covering a wide range of areas, from conservation of cultural heritage to in-depth analysis of the hydrogeological data of the lagoon. According to their web site,

This data is the basis for the operation of many services useful to the community, and are used daily by applications and predictive models.

For example, in the 1990s VPC collected data about the canals which was used by the Dept. of Public Works for badly needed dredging. In the 2000s VPC has evaluated tourism and retail, conducted impact studies regarding cruise ships, and conducted the first traffic studies in the canals and lagoon among many other initiatives.

Data is also the foundation of the products being developed by SerenDPT, but there is a fundamental difference; says Carrera,

SerenDPT was born in the hope of creating real change, and producing not only useful projects, but actual products that can be sold and create jobs.

As is well known, Venice has a local economy that is based to a large extent on tourism. This has created a big problem, mainly due to the lack of opportunity for finding work in Venice that is not connected to tourism. During the pandemic this is now even more so, due to the fact that tourism related work itself is in crisis. SerenDPT’s approach to this is to work on creating a new economy by creating ventures that can employ people in Venice. From this perspective, this approach to combating tourism’s effects on the labor market is complementary to fighting overtourism directly, building alternatives that are sustainable and which can ultimately displace some of the tourism economy.

At present SerenDPT works with a community of around 100 people; some are paid and others work as unpaid volunteers, student or interns. Thus SerenDPT is not only creating work, but also providing valuable training and education to help others start their own projects or find skilled work.

If this idea seemed forward looking at its inception in 2017, it appears to be almost prophetic now. The need in Venice for new businesses and an economy that is not heavily dependent on tourism has come into stark relief since the arrival of Covid-19, which has thrown the tourism industry into a previously unimaginable crisis. Carrera sees investment in alternatives as likelier than ever now.

I think that will probably be one of the things to come out of this. Now people have completely grasped that tourism cannot be the sole economy.

The key is building investment in new economies and promoting new kinds of work in Venice, then using these investments to successfully create alternative economies.

There is another ambitious goal behind SerenDPT’s work, and that is using data to help productively inform and facilitate decision and policy making. Data, being neutral by nature, can help move policy discussions and debate beyond ideology and toward informed and practical compromises. SerenDPT, says Carrera, is

Not trying to come up with our own solutions, but rather to create the forums in which solutions can be discussed.

By (another) stroke of good timing, SerenDPT is now part of a global project with exactly this aim: SerenDPT was named a research partner in the European Smartdest project, which was made official this past spring with €3.1 million in financing from the European Community Horizon 2020 program. The project will look at tourism pre-and post Covid-19, and will include the participation of 12 locations in eight countries. Venice is one of the first four cities targeted for data collection.

The initial goal of the project was to analyze social exclusion caused by so-called overtourism,

However, the crisis caused by the coronavirus has created unprecedented conditions, which has led us to re-formulate the direction of the project.

The timing, though, is excellent.

By pure chance we have three years of funding to study what to do next.

Meanwhile, Carrera is looking to the future, beyond his many current projects – there are new programs in development, and he has more ideas about investing in Venice.

Just reducing tourism without providing economic alternatives is like shooting yourself in the foot!

says Carrera, and it’s an appealing way to look at things, especially when it’s backed up by concrete projects to bring to the table. The work SerenDPT does may be sophisticated, but the program is clear: invest in creating high-tech industry, invest in the city, and use data and technology to help move Venice in a new direction for economic development. The fact that Carrera’s incubator is up and running, already working on meeting this need at such a moment of crisis, is, it would seem, yet another case of excellent timing for Carrera’s ventures – you might even call it serendipity.