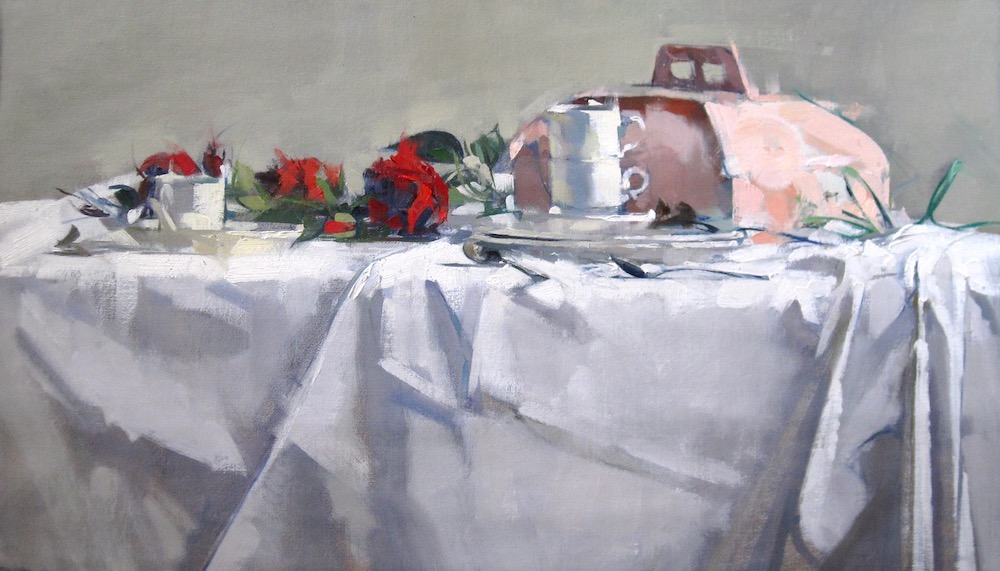 We were discussing the writing of William Faulkner, Maggie Siner and I.  She disagreed with me, sharply and absolutely.

I said that the fundamental power of art lies in the trick of forcing the beholder to create reality, as in Faulkner in “Light in August” describing a courthouse steeple.  Flying around it are “pigeons like paint smears.”  (Quoted from long-ago memory here.)

Faulkner tempts the reader into melding two utterly unlike things – pigeons and paint smears. Faulkner seduces the brain into making an impossible cross-synaptic leap between a pigeon and a paint smear.  He doesn’t create the pigeon, the reader does.  It’s a sweet epiphany. There it is – a pigeon, alive, airborne and darting around that steeple, hatched from little black marks on paper.

Such are the mechanics of metaphors and similes, I argued.

I think a pigeon looks exactly like a paint smear!!! . . . Imagine putting a spot of black paint on your finger and quickly smooshing it in one direction.  There you have the perfect shape of a pigeon!

Well, yes, except that Faulkner’s simile implies the motion of the pigeon.  But is it a pigeon or a paint smear?

The question gets metaphysical very fast. Somewhere in my youth I remember reading about a woman telling Matisse the arm of his model was too long.  Matisse replied something to the effect of “Madam, you are confusing a painting with a woman.”

And there’s the overworked Zen saying:  When pointing to the moon, don’t mistake your finger for the moon.

Here is the excitement in Siner, along with Faulkner and Matisse. There’s no mistaking of the finger and the moon, the pigeon and the paint smear, the painting and the woman.  They’re neither the same nor different.  They set our minds to vibrating between both sides of an irresolvable paradox.  It’s a happy confusion.

Siner is particularly confusing and paradoxical. That’s the joy in her work. The table cloth, the chair, the wineglasses are laid on with paint smears, with thick and quick gestures. The paint doesn’t hide, doesn’t try to fool you, as it does in trompe l’oeil painting. On the other hand, she refuses to make the physical existence of paint the point of her pictures.  She is painterly but she is no abstract expressionist.

She has a knack of mixing self-defining colors, as if her reds and blues should be called Siner red and Siner blue.  Sometimes she’ll put them next to a complementary color that enlivens them, her trick being to mix the color so it’s just far enough away from the color wheel that the viewer has to work to see it as a complement.

She makes us work.  That’s her secret. And somehow the job is never done, by her or by us.