The most scandalous thing about the Italian Government's decree of 13 July 2021 is that public opinion and newspapers all over the world are commenting on nothing, given that the decree does not actually exist.
GIOVANNI LEONE 18 Luglio 2021 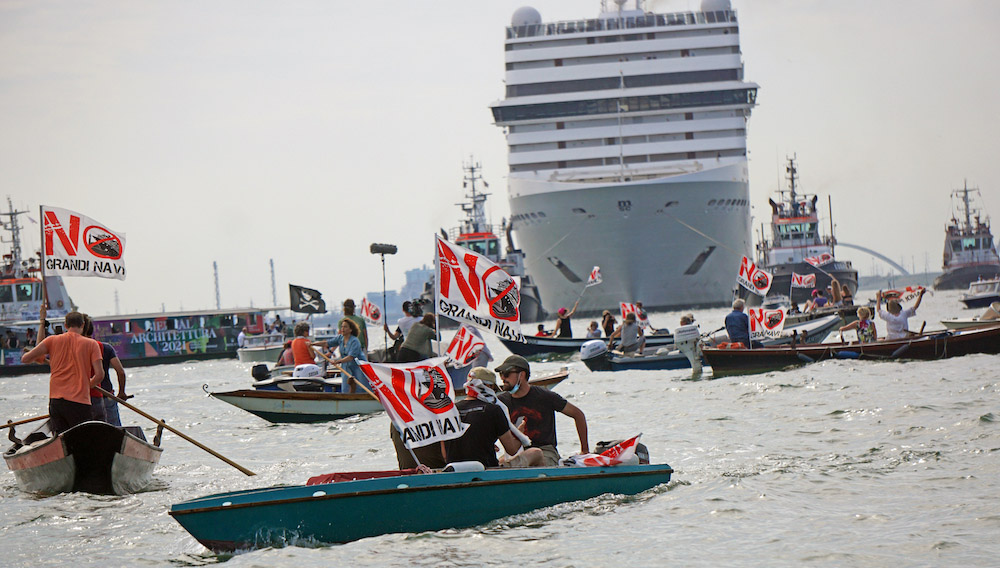 The most scandalous thing about the Italian Government’s decree of 13 July 2021 is that public opinion and newspapers all over the world are commenting on nothing, given that the decree does not actually exist. On the government’s website there is no text, and we find only two references dated 13 July: a note entitled Grandi navi e Autorità per la laguna di Venezia, nota della Presidenza del Consiglio and a press release, Misure urgenti per la tutela delle vie d’acqua di interesse culturale e per la salvaguardia di Venezia (decreto-legge, “Urgent measures for the protection of waterways of cultural interest and the safeguarding of Venice (decree-law)” in which appears a brief summary but not the text of the decree, which was circulated in draft form as a government “pamphlet” which appears generic and incomplete, not only because of the many ellipses and excessive independent variables (marked with Xs), but also because it is incomprehensible due to its lack of complete meaning. Smoke in the eyes with a whiff but no trace of roast.

If we try to do an exercise in logic, we get into difficulty as soon as the first line of the second paragraph of the article, where the urban waterways which are declared a national monument include the San Marco canal and the San Marco basin, which in nautical toponymy appear alternatively. From the mouth of the Lido port we take the San Nicolò canal and then:

– in the nautical map for yachtsmen by Belletti editore the bacino di San Marco, which is not only the water square in front of the ducal palace but also the waterway from Sant’Elena to the Giudecca canal;

– while in the nautical map by the Magistrato alle Acque published by Mare di carta, and in the official map of the Istituto Idrografico della Marina no. 226, the whole waterway between the Giudecca and San Nicolò canals is marked “canale di San Marco“.

It seems that the government, in order not to make a mistake, cited both official and popular names.

On the second line we read the date of 1 August 2021, a positive surprise; the timeliness of the measures sets the reader at ease, and from here on he is relieved and ends up continuing to read absent-mindedly. This is followed by a description of the characteristics of the ships banned from navigating in the “urban waterways”, which contain innovative elements with respect to the Clini-Passera decree, for example, reducing the allowed tonnage from 40,000 to 25,000 tonnes. However, there are no constraints placed on the ships that would have to dock in Marghera after navigating the lagoon waters. From 1 August, ships no must longer pass through St Mark’s basin, and will have to go outside the lagoon.

In paragraphs 3, 4, 5 and 6, economic issues are introduced in principle, which are impossible to comment on in detail due to excessive vagueness. Venetians are understandably annoyed at the planned compensation to those who have damaged the city and the lagoon for years, but the measure is understandable for legal and contractual reasons between the parties. This is a matter to be watched and still to be fully defined, for the benefit and in support of the workers.

Article 2 starts off in swampy terrain.

The President of the Port System Authority of the Northern Adriatic Sea of Venice is appointed Special Commissioner with the task of proceeding to the design, assignment and execution of works to be done for the arrangement of temporary ship’s docks, the maintenance of existing canals after environmental impact assessment (VIA), and ancillary works for the improvement of accessibility and boating. This extra-ordinary procedure in the absence of projects is very reminiscent of the Mo.S.E. affair.

The discerning reader who stops to think about it will notice that there is no mention of the Ministry of the Environment among the ministries involved, which makes it clear that the lagoon is subordinate to economic, aesthetic and tourist interests, but not environmental ones. The only mention is that of the Environmental Impact Assessment … but of course there would be an evaluation for such a dangerous and delicate project as the modification of the morphology of the lagoon!

Timeframe? How can we establish time limits in the absence of a program and a project? Paragraph 4 states that the terms and activities connected with the implementation of the measures will be established within sixty days; so, only then would it be credible to indicate a timeframe, and only if it is possible to do in sixty days what has not been done in ten years. Similarly, the amounts indicated in paragraph 5, which are not associated with projects but seem to refer to budgetary needs, are clearly unfounded.

A few additional considerations. What limits are placed on ships entering the lagoon in the direction of the new Marghera docks? None. Today the ships arriving in Venice already reach 100-120,000 tonnes, but in general the biggest ones now reach over 200,000. What’s to stop us from deciding in sixty days’ time to bring back the large cruise ships, which were planned to be reduced in number and which in the past were already allowed to dock at Marghera in certain cases, such as the coincidence with the Redentore festival?

The trailing dots at the end of the draft decree are eloquent: the intention is to sell the bear’s skin to UNESCO before it is caught.