Who is the boss of her body?

Aftet the recent Fetal Heartbeat law in Texas, the pro-choice v. pro-life battle has instantly revved up to Orwellian decibel levels. The battle will go on for years, and to be sure, the advent of faux wombs will be a game-changer.
JUDITH NEWCOMB STILES 13 Settembre 2021 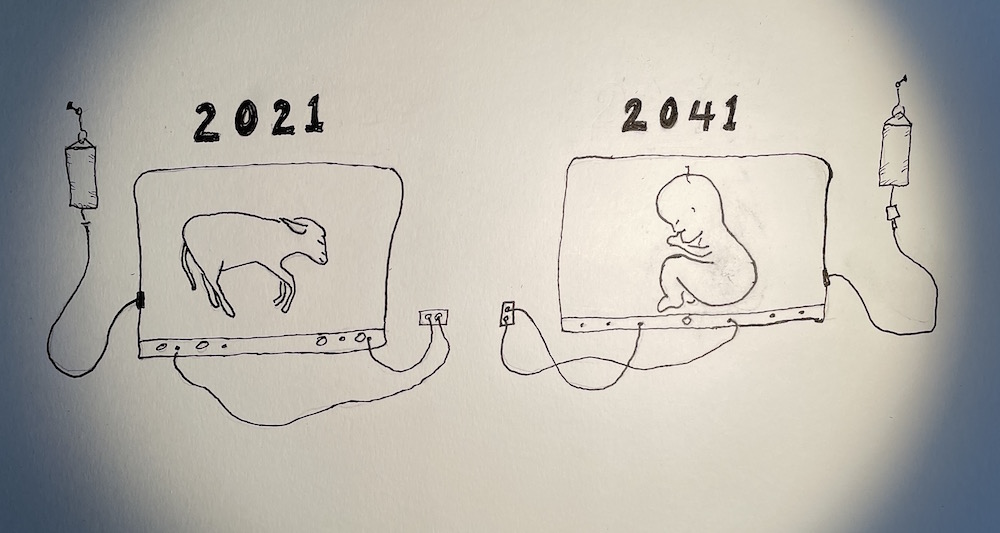 Imagine a world where it’s trendy for teenage girls to harvest their ovarian eggs, fertilize them in a laboratory, and then grow their babies inside a faux womb on a date of their choosing. The faux womb resembles a plastic bag filled with amniotic fluid replete with tubes and wires for nourishment and temperature control. By the year 2084 (think George Orwell’s 1984), the sales pitch brochure at the gynecologist’s office might read:

Ladies, think of the convenience! Once your eggs are safely in the freezer, no more pregnancy scares, because with a little snip to your fallopian tubes, you can finally take total control of your fertility. When you want to have a baby, your egg can hook up with a sperm in a petri dish and then transfer to a faux womb. You won’t lose your figure during pregnancy, and better yet, no more angst about whether or not to have an abortion. Now you can rely on safe and effective voluntary sterilization like millions of savvy women.

Sound all too futuristic and really scary? Think again. Thanks to technology, faux wombs are already here. Researchers at Children’s Hospital of Philadelphia have invented artificial wombs for fetal lambs. They were successful in creating an amniotic fluid environment that results in normal lung maturation and brain growth in the first trimester. Some researchers believe within ten to fifteen years, faux wombs will be available to shepherd human fetuses to full-term.

What will pregnant mean with faux wombs?

These days we get whiplash from trying to keep up with the new normal, such as breakthrough successful transgender pregnancies (births from transgender men who were designated female at birth.) They still have a uterus and are able to get pregnant and have a baby. The new normal is changing our language to fit these breakthroughs, such as suggested substitution of  “birthing person” for the word “mother”. After all, for millions of years the male seahorse gets pregnant and carries the baby seahorse in its womb, so why not men?

The invention of faux wombs will be a godsend for babies born prematurely, but how will this affect the pro-choice argument that revolves around the important concept of viable fetus? As of Roe v. Wade in 1973, the Supreme Court decision that legalized abortion, pregnancies could be aborted up until 22-24 weeks in the United States when the fetus is not viable outside the womb. What will be the new context and the new definition of viability with the invention of faux wombs? This is just the kind of scientific advancement that is a Pandora’s box for the pro-choice v. pro-life battle that continues to rage since Roe v. Wade.

Hard for this mother of three to wrap her head around the futuristic idea of bringing a fetus to full-term in a faux womb by the year 2040. In the meantime, rewind to the new 2021 Fetal Heartbeat law in Texas. The pro-choice v. pro-life battle has instantly revved up to Orwellian decibel levels, not only because it seeks to obviate Roe v. Wade, but also embedded in this law is a new twist:  that any ordinary citizen can sue doctors, nurses, or “enablers” of any abortion if a heartbeat has been detected in the first six weeks. The double twist is that the informer (ordinary citizen) will be rewarded with a $10,000 bounty if the lawsuit is successful. Think again of George Orwell’s book 1984, only now Big Brother has deputized Little Brother to be a snitch. This means anyone, even if they have no connection to the abortion, can sue. Little Brother is now the plaintiff, and the state is immune from damages brought on by the lawsuit.

The Fetal Heartbeat Law, known as Senate Bill 8, is also constructed to potentially bankrupt the defendant (doctor, nurse, enabler etc.) with court costs. Leave it to clever attorneys to insert themselves into the money mix by writing a law that uses possible bankruptcy as a cudgel to scare the defendants.

Notwithstanding any other law, a court may not award costs or attorney’s fees under the Texas Rules of Civil Procedure or any other rule adopted by the court under Section 22.004, Government Code, to a defendant in an action brought under this section.

Approximately 862,300 abortions were performed in the US in 2017, according to the Guttmacher Institute. This tally means the abortion rate stood at 13.5 abortions per 1,000 women of childbearing age. It is difficult to know how many clandestine abortions were performed pre-Roe v. Wade, but according to Lynn Paltrow, Executive Director of NAPW-National Advocates for Pregnant Women, it is estimated at about the same number, which means that even if Roe v Wade is decimated by lawsuits, abortions are not going away.

I don’t have enough fingers and toes to count the number of women I know who had illegal abortions before Roe v. Wade, including my grandmother in 1934 who had to expel the fetus at home alone and then carry it back to the abortionist in a paper bag  to “properly” dispose of it. Full disclosure – in 1976, I had an abortion at Planned Parenthood of Boston in a safe, clean environment, and the vacuum aspiration procedure went more smoothly than a root canal.

At least 23 abortion-related cases are pending in federal appeals courts, according to the anti-abortion advocacy group Susan B. Anthony List, a pro-life organization that grades Congressman on their record⎯pro-choice F, pro-life A+. One of these anti-abortion court cases has made it all the way to the Supreme Court, and in October, SCOTUS will hear Dobbs v. Jackson Women’s Health, a Mississippi case that asks the court to consider a state law that bans abortions after 15 weeks of pregnancy. This is an attempt to overturn Roe v. Wade⎯the 1973 decision that upheld that a fetus is not viable outside the womb before 22-24 weeks, therefore it is the constitutional right of a woman to decide if she will terminate a pregnancy in her own body. My body-My choice. Lynn Paltrow reminds us,

Not only will the backlash to a ban on abortion be swift and strong, but we can expect a massive uprising against recognition of unborn rights that, in fact, require pregnant women to forfeit their civil and human rights.

The Dobbs v. Jackson Women’s Health decision will not be made public until spring 2022, but don’t hold your breath. The battle will continue for years, and to be sure, the advent of faux wombs will be a game-changer. Will the Roe v. Wade decision become a moot point?  Will the debate shift to who has the right to control the fertilized egg? Will the mantra My body-My choice morph into My Egg-My choice?