Finding Fioretta. A search that became a film and exhibition 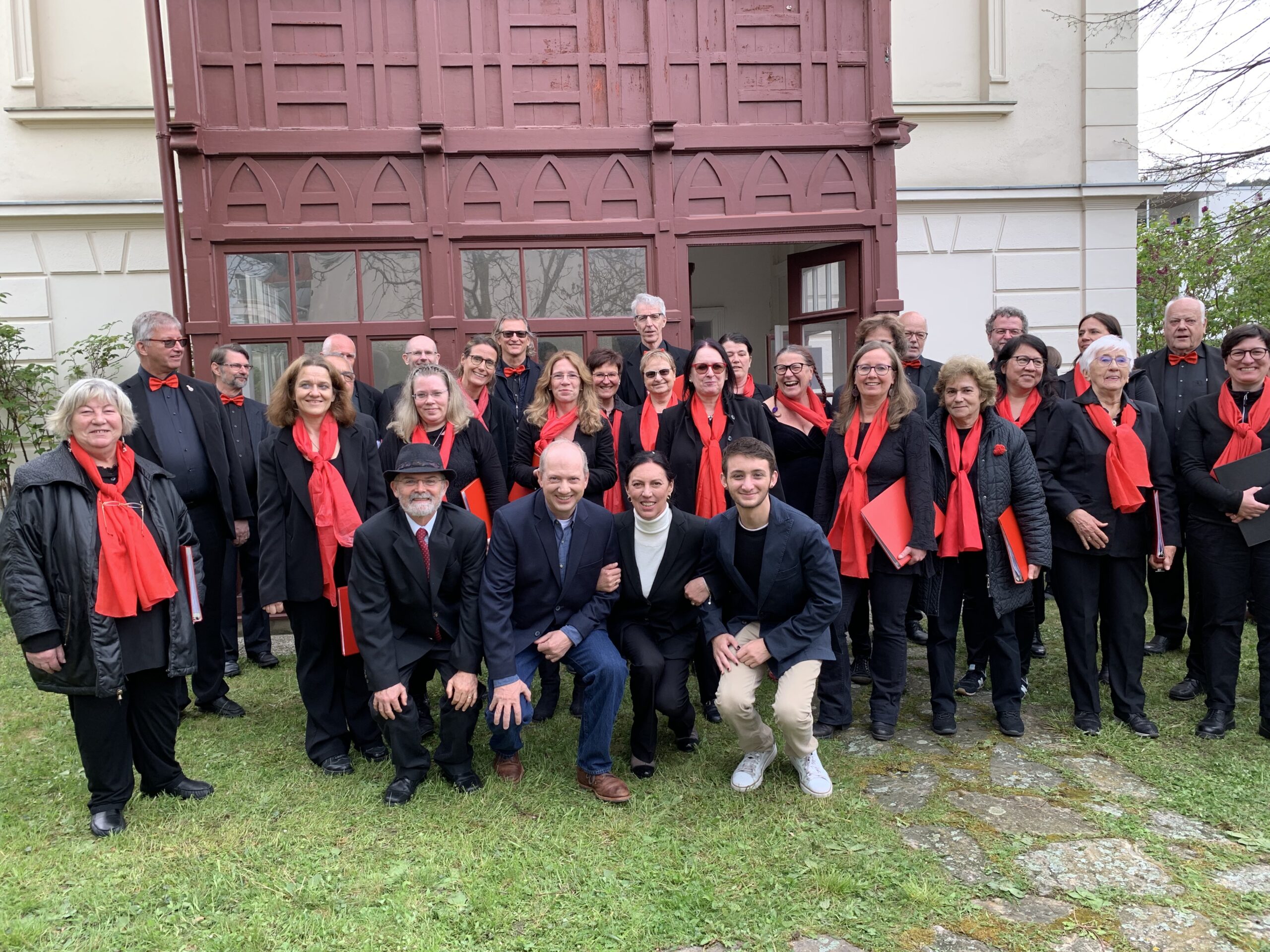 In the summer of 2021, my cousin Randy Schoenberg, who is known for the story of the Klimt paintings that were returned to their owner, Maria Altmann (in 2005, Randy, an attorney, challenged the Austrian government and obtained the restitution of five works by Gustav Klimt that had been taken from the woman’s family by the Nazis. The case inspired the film Woman in Gold, with Ryan Reynolds playing Randy Shoenberg and Helen Mirren as Maria Altmann), began to tell me about his recent genealogical discoveries. Randy has been enthusiastic about genealogy since he was a child. But as an adult he has made it a full-time activity: in addition to having been president of the Los Angeles Museum of the Holocaust for ten years, he is on the Board of Directors of JewishGen, where he directs the Austria-Czech Rep. research section, and is an editor for geni.com, and international genealogy website.

Randy told me that not only had he discovered that we were fourth cousins to Paul Stanley (the stage name for Stanley Bert Eisen, better known as the singer and guitarist for the famous rock group Kiss), but that he had furthermore learned he was a distant relative of a rabbi from the 1500s, one Dr. Eliyahu Menachem Chalfan, who was an important figure in the ghetto of Venice.

Chalfan was a doctor, a scholar and an expert on legal questions. We know that in 1530 he was asked for counsel by King Henry VIII regarding the annulment of his first marriage. Friends with Pietro Aretino, he favored the approval of teaching Hebrew to Christians. He was also friends with the Kabbalistic mystic Solomon Molcho (1500-1532), who would meet Charles V at Regensburg in an effort to convince the emperor to create a Jewish army for the conquest of Palestine, which was then in the hands of the Ottomans. However, Solomon Molcho was subsequently arrested as a heretic and burned at the stake in Mantua. Rabbi Eliyahu Chalfan would go on to create a large Kabbalistic graphic containing Molcho’s new ideas as well as his own. The book has been in the Biblioteca Medicea Laurenziana since 1570.

Fioretta Kalonymos was Eliyahu Chalfan’s wife, and she is buried in the ancient Jewish cemetery on Lido. She too was one of the first Jews in the ghetto of Venice, which was founded in 1516.

Fioretta’s father was Calo Kalonymous (c.1450 – c. 1520), a doctor, astrologer, linguist, translator and philosopher. He was astrologer to the court of the Duke of Bari before moving north because of the Inquisition.

And so my cousin Randy, who lives in Los Angeles (the city where our grandfather Arnold Schoenberg arrived in 1933 to escape the Nazis, with my mother only one year old at the time, and where two other children were born, one of whom, Ronald Schoenberg, is Randy’s father) has discovered that our ancestors passed through Venice, later going to Prague and then to Vienna.

The fact that we have some “Venetian” ancestors, and especially Fioretta’s gravesite, which can still be visited on Lido, really struck me. My mother, who grew up in Los Angeles, met my father while travelling with her mother in Europe in 1954, at the first performance of Schoenberg’s opera Moses and Aaron in Hamburg, and they married a year later in Venice.

While listening to these fascinating stories I got the idea of suggesting to my cousin that this research, which, for now, goes all the way back to 1400, could be made into a good film, particularly because in a certain way it relates a typical story of a European Jewish family: the continuous migration due to persecution, life “on the move”, the effort of starting over from zero yet again in a new place, and the sensation of not truly having a homeland, if not that of membership in a people/culture/faith, the only identity possible.

In the meantime, my cousin continued his research, finding the descendants of Eliyahu Chalfan and Fioretta Kalonymos through documents, old texts in libraries in Prague and Vienna, and by searching for and reading the inscriptions on tombstones in the various Jewish cemeteries in the two cities. He was able to document the descendants of the Venetian couple all the way up to Arnold Schoenberg’s mother, Pauline Nachod (1848-1921), a native of Prague who moved with her family to Vienna in 1869. Pauline was widowed and raised her three children and two orphaned nephews on her own.

Randy took me seriously and is now shooting a film with documentary director Matthew Mishory, with an American production team filming in Prague, Vienna and Venice.

So, I went back to Vienna for a week, where I took part in some of the filming of the documentary with Randy and our other cousin Arnie Schoenberg, who is an archaeologist, and Randy’s youngest son, Joey.

I visited three cemeteries, met experts on tombstones and inscriptions and the history of cemeteries. I heard stories about tombstones that were moved, destroyed by the Nazis or saved in extremis by the Jewish community and hidden for years. There are cemeteries that have now been reconstituted, but where the tombstones no longer correspond to the bones of the people to whom the tombstone belongs.

I met a woman named Barbara Kintaert, who formed a committee to research the stories of Jewish people who were removed from the condominium where she lives in 1938, and then dedicated a plaque to those people, which can be found at the entrance to the building. A third of them were deported and killed, a third managed to escape to other countries, and nothing is known of the fates of the other third. Subsequently the research committee formed by Barbara designed a memorial on the same street, Servitengasse, which recalls all of the residents on the whole street who were expelled from their homes. In 1938, 56% of the population of that street was of Jewish descent, and there has been no information about them for a very long time, until the work undertaken by the committee. A competition was held for art students to create the memorial, and the result is a hole in the ground with glass over it, like an archaeological excavation, containing 426 old keys bearing all the names of the people who were sent away from their homes and disappeared. The site is a necessary stop that will give you chills.

So, between very interesting encounters, stories and places that taught me many new things about the history of the Jewish community of yesterday and today in Vienna, we also filmed a scene where my cousin Randy listened to my proposal to paint some portraits. The portraits of Eliyahu Chalfan and Fioretta Kalonymos, and of their descendants, are obviously imaginary, as we have no visual references for these people’s faces, if not starting with Arnold Schoenberg’s parents.

However, the portraits that we actually created with Nicola Golea in the last few months, and which will be exhibited in Ziva Kraus’ Ikona Gallery in the ghetto of Venice from 8 May until 8 August (the inauguration of which will be filmed and included in the documentary) go even further back, because Randy traced Fioretta’s father, as mentioned above, but also Eliyahu Chalfan’s father, Rabbi Josef Colon Trabotto (Maharik) (c. 1310 – c. 1480). Rabbi Trabotto was the founder of an important center of Talmudic study at Pavia, whose posthumously collected and published writings became fundamental texts for scholars.

In Vienna we were also at the house where Arnold Schoenberg was born, which remained standing under the bombardment in the war while almost all the other homes around it were destroyed.

In this building we visited a beautiful apartment laid out with furniture from 1900s Vienna, and many pictures and works from the same period. The owner of the house and of the building descends through a relationship acquired by the art dealer and art critic Christian Nebehay, Klimt’s first biographer and author of essays on Schiele at the beginning of the century. However, the apartment where Arnold Schoenberg was born was a single room flat on the ground floor, with the sink and bath in the hallway, shared with all the apartments on that floor. That tiny home speaks to the economic situation of the Schoenbergs in 1874. We met a very friendly and welcoming young woman, a psychologist, musician and music therapist who let us see the ground floor apartment she lives in, which indeed is very small, but at least today has a kitchen, bath and running water in the house!

The pictures that Nicola and I painted are, as I said, imaginary, but for some we used the faces of family members from my family and Randy Schoenberg’s family, his children, and also the face of our cousin Arnie, who is the son of my mother’s other brother, Larry Schoenberg.

We worked on these portraits from around January, after Randy’s visit to Venice with the documentary director for the first site surveys and meetings with experts and historians of Venice. The fantastic Aldo Izzo, custodian of the memories of Jewish Venice, guided us in the ancient Jewish cemetery of Lido until we actually found the headstone with Fioretta’s inscription.

During that visit Randy told us the stories of some of these figures in detail, and in the following months he provided us the various biographies of all the descendants to give us material to work with in developing the portraits.

We tried to get to know the practices and customs, and the actual costumes (!), that is the clothing of the various eras and places. But most of all we tried to understand how society was organized then, the social classes, the rules about clothing, for example from the foundation of the Venetian ghetto one had to wear an accessory of a certain color, be it a pendant, a necklace, a ribbon or a headdress to be recognized as Jews when leaving the ghetto.

It was truly fascinating work, looking at many portraits from the past. But we did not want to recreate period pieces. Rather we wanted to restore faces and personalities to the names, to these ghosts.

To think that more than five hundred years ago Fioretta walked the campi and calli of the ghetto, and not only there, but around Venice, really had quite an effect on me, and even more so after we found her grave on Lido. Who knows if her headstone was moved, who knows what Fioretta’s story was, and if, despite having been born thirty years earlier, she might have attended the literary salon at the home of Sara Copio Sullam, a well-known intellectual whose acquaintances were scholars, musicians, theologians and poets, and whose salon was also open to her Christian intellectual contemporaries. Sara Copio Sullam’s grave is also found in the ancient cemetery at Lido, not far from Fioretta’s.

In conclusion, I believe that tracing history in such a personal way, and here I truly thank my cousin Randy for his passion for family trees, can give us a more direct and intimate relationship with the events that have brought us here.

This project, after months of work with Nicola (we share the studio where we paint) thinking about faces, expressions and characters, but also about the tonalities that have defined these portraits, has opened the way to knowledge, encounters and discoveries that have truly enriched our existences.

Cover Image: Arnie, Randy and Joey Schoenberg with Serena and the Nordbahnbund Chorus on 1 May.
TRADUZIONE DI PAUL ROSENBERG

Serena Nono was born in Venice in 1964. In 1982 she moved to London and attended Kingston University. She earned a degree in Fine Arts in 1987. In 1989 she returned to Venice. In 1991 she began to exhibit her work in Italian and European cities. In 2006 she began filmmaking. Serena lives and works in Venice.