In this dramatic moment for Europe, Venice is hosting an exhibition of one of the leading contemporary photographers in Ukraine, Oleksandr Chekmenyov, currently covering the war on the ground. The exhibition includes portraits of Ukrainian people from the 1990s to the current days of the war.
KOSTANTIN AKINSHA 7 Maggio 2022 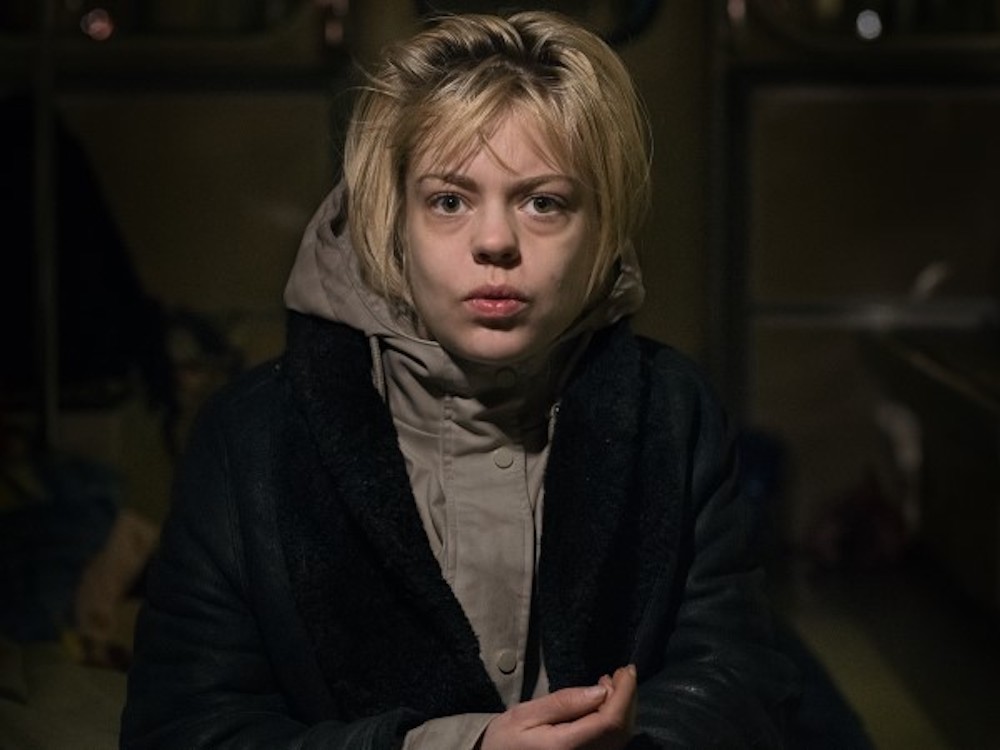 In early March, when the Russian army reached the outskirts of Kyiv, and the first enemy tanks broke the Ukrainian defense lines and rolled into the town of Bovary, I called Oleksandr Chekmenyov. He answered immediately. Oleksandr was hiding in the cellar with his family and a family of refugees with five children he sheltered. He was in relative safety (any safety in Ukraine today is relative) but needed some money to feed his numerous dependents. The problem was solved swiftly. The next time I called him, Chekmenyov couldn’t speak. The reception was horrible, interrupted by the buzzing sounds. “I am working,” he screamed. “Will call you later.” Soon I learned that he was approached by the New York Times.

Chekmenyov is a well-known photographer, but he doesn’t like to work as a reporter. His genre of choice is portrait. Somehow, he convinced an editor in New York that he would make portraits of the citizens of Kyiv, the city in peril of the Russian occupation. It looks like such a proposal was initially taken with a grain of salt. Any news outlet prefers striking snapshots of battles, burning tanks, and exploding buildings during the war. Portraits, unfortunately, are not newsworthy. However, the results of Chekmenyovs undertaking exceed the expectation of his editors. The whole issue of the New York Times Magazine was dedicated to the portrait gallery created by the photographer. Then the portraits were published in the newspaper. The series proved to be so successful that New York Times published an article about how the gallery was produced, illustrated by a photo of Chekmenyov looking strenuously into the visor of his camera aimed at one of his models.

Chekmenyov photographed random people – a woman sheltering from bombardment at the underground metro station, an actress who became a volunteer distributing medical supplies, an old teacher who refused to leave his house during the air raids, a young girl who was a pizza chef in the peaceful life but joined the Territorial Defense and for the first time took arms to defend her home. These dramatic portraits reflected the despair and resolve, glimpses of private tragedies united in the enormous tragedy of the city populated by nearly three million people. I believe that they are the best photographs made in Ukraine during this war. Numerous portraits created by the photographer merged into one image – the image of a human being facing the nightmare of aggression that shattered his life but did not destroy his spirit.

Chekmenyov was born in 1969 in Luhansk, one of the centers of the coal mines region of Donbas. He started working as a commercial photographer in a small studio in his native city. By 1997 he moved to Kyiv and resumed his career as a photojournalist. The relocation to the Ukrainian capital happened because a newspaper hired Chekmenyov. However, a year later, it bankrupted, and the photographer found himself without a position. Since that day, he remained freelance refusing to take permanent jobs in news organizations.

Already in Luhansk, the art of Chekmenyov’s photography gained some characteristics which defined his transformation into a master of portrait. Living in the depressed region which came to the border of economic collapse after the fall of the Soviet Union, the photographer observed the life of deprived – coal miners, risking their lives underground, the city scam of petit criminals and alcoholics, pauperized elderly unneeded both by their children and the society. Initially, Chekmenyov photographed many scenes of the life of coal miners or urban marginals, but gradually the characters immortalized by his lens became more critical than their surroundings.

To conduct the research for the photographic version of La Comédie humaine of the post-soviet Donbas, Chekmenyov selected not very traditional ways. In 1994 he took a position of a nurse with the local ambulance to have a chance to photograph different accidents. The same year he volunteered to take snapshots of the disabled and bedridden elderly during the national campaign to issue new Ukrainian passports. Both adventures gave ground to creating striking photo series showing a bare reality of suffering and deprivation.

In a sense, Chekmenyov is the Ukrainian reincarnation of August Sander (1876-1964), the famous German photographer, author of the endless gallery of types “People of the 20th Century,” which he continued to produce for over forty years, categorizing his models by social type and occupation.

Unlike Sander, Chekmenyov is not working on one gallery but creating different series, which combined become the portrait of contemporary Ukraine. The focus of his professional and human interest is deprived people – Roma, urban eccentrics, homeless, victims of aggression, aged veterans of the Second World War, and soldiers crippled during the war with Russia started in 2014.

Chekmenyov is not just an observer. To photograph his models, he has to create a bond with them, understand them, and love them. He told me how difficult it was to convince the homeless to pose for his series “Deleted.” He needed to talk to them, gain their trust, and become more than a photographer, but a confidant if not a friend.

One of my favorite photo series by the photographer is a gallery of portraits of patients at the mental clinic. It is called “Lilly.” The name of the series was not premeditated and came to Chekmenyov when he was photographing the mentally ill.

He recollected that session:

Suddenly, I saw artificial flowers on the fridge and immediately understood what a series should be. I got an old mechanical Rolleiflex with a black and white film out of the bag. I seated each patient by the window, handed a bouquet of artificial white lilies, and asked them, “Smile, please.” Then I ran into a big problem – not all sick people could smile. But I tried to make everyone laugh. Even the most difficult patients wanted to get a bunch of flowers and look into the camera. These people needed very little – a candy, a pack of cigarettes, artificial flowers, or at least our smiles. They meet every new person as the children meet their parents, whom they have not seen for a long time. They remain children who will never grow up.

Now this portrait gallery lands in Venice. I was very happy to curate an exhibition with a selection of the works, thanks to the generosity of the Municipality of Venice that made the beautiful Santa Maria Ausiliatrice venue available and the organizational and intellectual effort of Ca’ Foscari University of Venice, along with other crucial partners. This creates an ideal bridge between a cosmopolitan city that has always been a crossroads of civilisations and also hosts a significant Ukrainian community and a war-ravaged country that has received a lot of solidarity from Italy. Oleksandr Chekmeinov has been invited to Venice and we wholeheartedly hope that he can come to see how Venice has paid tribute to his landmark work.